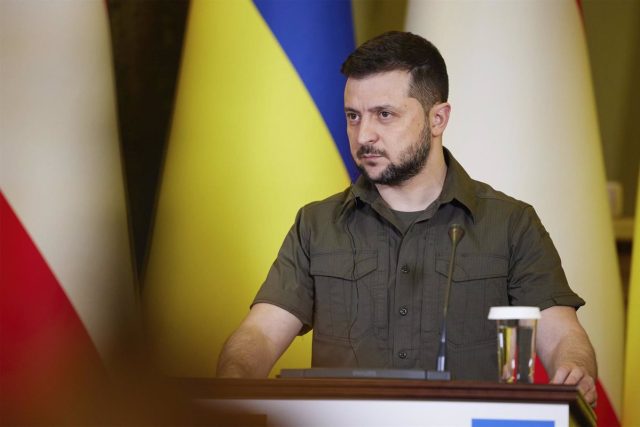 The President of Ukraine, Volodimir Zelensky, has asked the European Union to “stop sponsoring Russia’s military machine” and has assured that the activity of Russian troops on Ukrainian territory is further proof of Moscow’s “insecurity”.

“All this feverish activity of the occupiers testifies first of all to their insecurity. The fact that even with significant stocks of Soviet military equipment and a significant number of soldiers, whom the commanders do not spare at all, the Russian troops doubt their ability to to break us, to break Ukraine,” Zelensky said.

In his usual evening speech, Zelensky has assured that “Russia will leave the international arena forever” if the “Russian leadership” does not “really seek peace”. “This war against Ukraine can only end in the strategic defeat of Russia, sooner or later,” he reiterated.

In this sense, he has once again recalled that the world needs “an oil embargo”, as well as the “clear disposition of Europe” to give up Russian energy. The Ukrainian president has reinforced the idea that the European Union “must stop sponsoring Russia’s military machine.”

Read:  Meloni assures Ukraine that he can count on the support of Italy's new government

In this way, Zelenski celebrated the fact that the Biden Administration had authorized the shipment of weapons and security material worth 800 million dollars – some 735 million euros – and also positively assessed all the talks held during the session this Wednesday.

“I was very happy to meet the presidents today. The negotiations were fruitful. It is important that they visited Borodyanka in the kyiv region, where they saw with their own eyes what the occupiers had done,” he said, referring to the presidents’ visit. from Poland, Lithuania, Latvia and Estonia –Andrzej Duda, Gitanas Nauseda, Egils Levits and Alar Karis, respectively.

In addition, he also thanked the visit to Bucha of the chief prosecutor of the International Criminal Court, Karim Jan, and recalled his speech before the Estonian Parliament. “We are already cooperating with Estonia in the field of digitization,” he added.

In his speech, the Ukrainian president praised the work of the international group of experts — headed by Michael McFaul and Andriy Yermak, which has been working for three weeks to assess the sanctions imposed against Russia.

“The group has prepared concrete proposals on how to eliminate the loopholes in the sanctions, which Russia constantly uses, and how to immediately improve the sanctions so that they are tangible for Moscow,” Zelensky said.

On the other hand, he stressed that Russian troops continue to intensify their activity in the east and south of the country. “They are trying to retaliate for their defeats. Rocket shelling and artillery strikes continue,” he has said.

“New columns of equipment are being brought in. They are looking for reserves. They are trying to recruit residents from the south of our country, that is, from these temporarily occupied areas in addition to the so-called mobilization in certain districts of the Donetsk and Luhansk regions,” he said. detailed.

Zelenski has assured that the removal of mines continues, since “the occupiers” have left “tens of thousands of unexploded projectiles, mines and booby-traps” throughout the territory. Finally, he thanked the work of the Ukrainian Armed Forces to liberate the country.