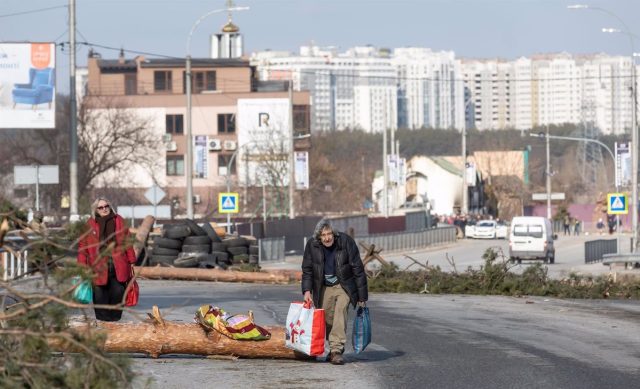 Almost 300,000 civilians have managed to be evacuated since the start of the war

The Ukrainian authorities have affirmed this Tuesday that, for the third consecutive day, there is no agreement with Russia for the opening of humanitarian corridors to facilitate the evacuation of civilians and the delivery of humanitarian aid in the midst of the war.

Thus, he has stated in a message on his Telegram account that the authorities of the city of Mariúpol have transferred that “the Russians refuse to create a corridor for civilians in the direction of Berdyansk”.

“We are continuing the difficult negotiations for the opening of humanitarian corridors in the Kherson and Kharkiv regions,” Vereshchuk said. The latest evacuations took place on Saturday, when about 1,500 people used these corridors to leave various towns.

In parallel, the Ukrainian authorities have reported this Tuesday that nearly 300,000 civilians have managed to be evacuated through humanitarian corridors since the start of the war, on February 24 when Russian President Vladimir Putin announced the start of what called “special operation”.

The Ministry of Reintegration of the Occupied Territories of Ukraine has indicated that kyiv has offered more than 340 humanitarian corridors, of which Moscow has accepted 300, but only 176 have been useful, after the Russian troops have violated the agreements reached.

“The occupiers continue to hold the Ukrainian population hostage, and all those involved will bear full responsibility for this war crime,” the Reintegration Ministry statement stressed.

The war broke out on February 24 after the invasion order given by the president of Russia, Vladimir Putin, who days earlier had recognized the independence of the self-proclaimed republics of Donetsk and Lugansk, located in the east of the country and the epicenter of a conflict since 2014.