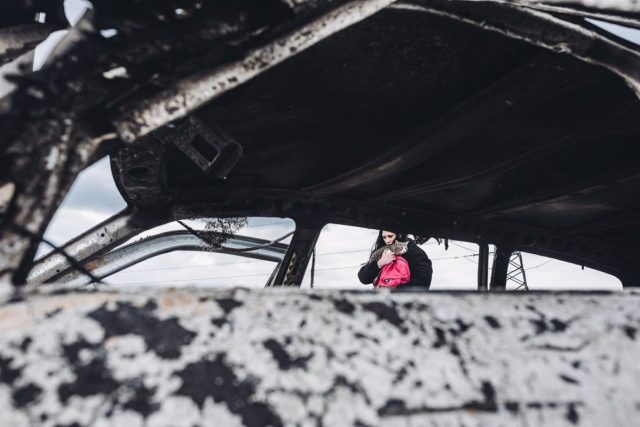 A young woman and her cat walk in front of a burnt-out car, on March 7, 2022, in Irpin, Ukraine. – Diego Herrera – Europe Press

The Ukrainian authorities have affirmed this Friday that “they do not rule out” that Russia “is preparing” for a “Syrian scenario” in the framework of the war in the country, unleashed on February 24 by order of the Russian president, Vladimir Putin, days before it had recognized the independence of the self-proclaimed republics of Donetsk and Lugansk.

“For the last three weeks, the Russians have been actively spreading stories about ‘biochemical laboratories’ in Ukraine,” said Vadim Denisenko, adviser to the Ukrainian Interior Ministry. “We cannot rule out that the Russians are preparing a ‘Syrian scenario,'” he added.

Thus, he stressed that there are “two aspects” to take into account: “Understanding what needs to be dealt with and how it will be dealt with”. “I believe that the relevant structures will publish everything that the population needs to know,” he argued, according to the Ukrainian news agency UNIAN.

“On the other hand, there is the enormous informational blow that must be inflicted on the whole world. This means that the Russians must understand that a chemical attack would cost them much more than an invasion,” Denisenko stressed, who has warned in this way of the possibility of Moscow preparing an attack with chemical weapons as part of its offensive.

Denisenko’s words have come a day after the Ukrainian Foreign Minister, Dimitro Kuleba, warned that after Russia’s “maniacal obsession” with the existence of alleged chemical laboratories in Ukraine, Moscow could be preparing another “terrible false flag operation.

The Russian Ministry of Defense denounced earlier this week that Ukraine was immersed in the development of biological and chemical weapons, and even mentioned a possible knowledge of the United States of these alleged laboratories, after which the White House came out to reject these “false information”.