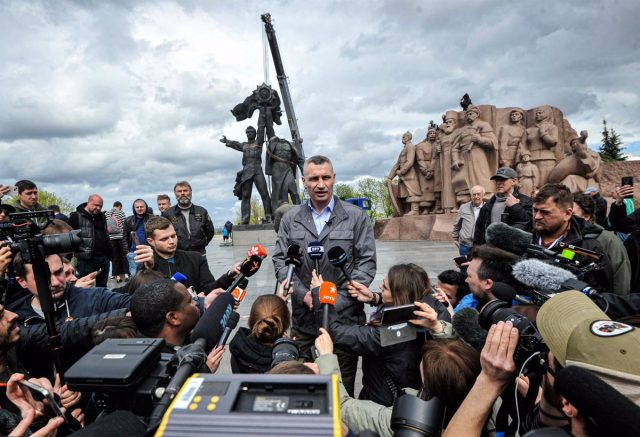 kyiv Mayor Vitali Klitschko addresses the press as a Soviet-era monument is torn down. – Sergei Chuzavkov/SOPA Images via / DPA

Kuleba assures that “with this heinous act of barbarism, Russia is once again demonstrating its attitude towards Ukraine, Europe and the world”

The mayor of kyiv, Vitali Klitschko, has denounced this Thursday new Russian attacks on the Ukrainian capital, coinciding with the visit of the United Nations Secretary General, Antonio Guterres, who has been visiting the region before meeting with the president, Volodimir Zelenski.

“Friends! At night, the enemy has fired on kyiv. Two hits in the Shevchenkivski district. All services are at their posts. Information about the victims is being clarified,” Klitschko wrote on his Telegram account.

At the moment it is unknown if there have been deaths as a result of this new Russian offensive on a residential area, according to the spokeswoman for the State Emergency Service in kyiv, Svitlana Vodolaga.

The attack lasted about two hours and one of the projectiles hit the first floors of a block of inhabited buildings, says the Ukrinform agency.

“Rescuers and doctors are working on the spot. They are also inspecting nearby houses, pulling people out. So far, three victims have been hospitalized,” Klitschko added.

Subsequently, the adviser to the Ukrainian Ministry of the Interior, Anton Gerashchenko, reported via Telegram that there have been three missiles launched by Russia over kyiv, but that one of them had managed to be intercepted by air defense systems.

“We are no longer asking NATO to close the sky for us, but give us powerful air defense systems that will allow us to shoot down Russian cruise missiles and planes!” he demanded.

In addition, it has increased the number of injured to six and has published a photo of an alleged engine of a cruise missile. “It will be handed over to our rocket specialists for study,” he said.

What happened in this town of the Ukrainian capital occurs at a time when the Secretary General of the United Nations is in kyiv meeting with President Zelensky, to whom he has acknowledged that the UN Security Council “did not do everything what was within their reach” to avoid conflict.

“This says a lot about Russia’s true attitude towards global institutions,” Zelensky criticized, who sees in the attacks on kyiv an “attempt by Russian leaders to humiliate the UN and everything that the organization represents.” “It requires a strong response,” he has said.

Therefore, Zelensky has warned that no one can “relax” thinking that hostilities have ceased or have focused only on the east. “We still have to fight, we still have to drive out the occupants,” he has said.

“Russia has hit kyiv with cruise missiles just as UN Secretary General Antonio Guterres and Bulgarian Prime Minister Kiril Petkov are visiting our capital. With this heinous barbaric act, Russia once again demonstrates its attitude towards Ukraine , Europe and the world”, denounced the Ukrainian Minister of Foreign Affairs, Dimitro Kuleba.

In this sense, the Ukrainian Minister of Defense, Oleksi Reznikov, has also expressed himself, who has described this offensive by Moscow while Guterres is in kyiv as “an attack on world security.”

Read:  The UN warns that more than four million tons of cereals are blocked in the ports of Ukraine

Later, Oleksei Arestovich, an adviser to President Zelensky, questioned how the United Nations Secretary General and the organization itself should act.

For Arestovich, the missile launch in kyiv is “revenge” for Guterres’ statement in Moscow, where he stressed that the events in Ukraine are “a war and not a special operation,” in the words of the adviser.

“Russia shoots him in the back. I wonder if Russia will remain a permanent member of the UN Security Council, or will he once again swallow that,” Arestovich settled.

REACTIONS TO THE NEW ATTACKS

The UN Secretary General, António Guterres, has shown his shock after the new attacks and the Ukrainian Foreign Minister, Dimitro Kuleba, has stated that with this act Russia “is once again demonstrating its attitude towards Ukraine, Europe and the world”

“The UN secretary-general has told me that he is shocked that Russia has launched a missile attack on kyiv while he is in the city for talks with President Zelensky. Ukraine calls it a ‘heinous barbaric act.’ and ‘postcard from Moscow'”, BBC journalist Ben Brown posted on his Twitter account after speaking with Guterres.

In the same Kuleba social network, he has also reacted to the bombings in kyiv, he has published: “Russia has hit kyiv with cruise missiles during the visit to our capital of the UN Secretary General, Antonio Guterres, and the Prime Minister of Bulgaria Kirill Petkov With this heinous act of barbarism, Russia is once again demonstrating its attitude towards Ukraine, Europe and the world.