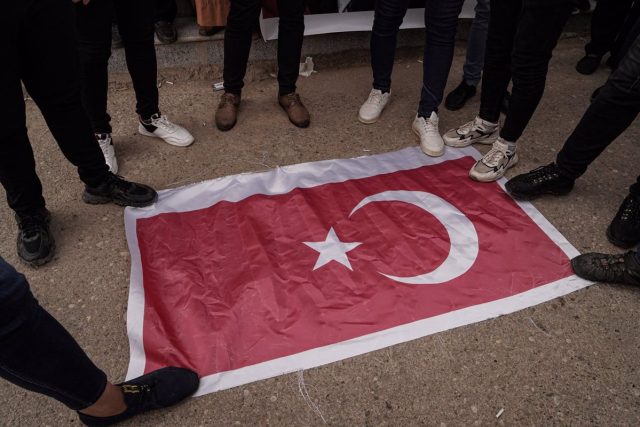 Turkey’s consulate in the Iraqi city of Mosul has been the target of a projectile attack Wednesday that has ended without casualties, amid rising tensions following the death last week of nine Iraqi tourists in an artillery attack blamed on Ankara against a resort in Zajo, located in the semi-autonomous region of Iraqi Kurdistan.

“The consulate has been attacked with four ‘Katyusha’ type shells, causing material damage in the surroundings of the consulate,” security sources quoted by the Iraqi news agency NINA have indicated, with no claim of authorship for the moment. A military base north of Mosul was also attacked.

The incident has been condemned by the Turkish Foreign Ministry, which stressed in a statement that the event has ended without casualties.” “We hope that those responsible will be brought to justice as soon as possible. We strongly call on the Iraqi authorities to fulfill their responsibility to protect diplomatic and consular missions,” it added.

Read:  AI singles out Iranian authorities for refusing to investigate deaths in custody in Iran's prisons

He also noted that it is “serious” that the attack was perpetrated after the meeting held late Tuesday by the UN Security Council to address tensions, held “at the request of the Iraqi authorities and at a time when Turkey is unjustly accused,” according to Ankara.

“On this occasion, we once again reiterate our call on the Iraqi authorities to focus on the fight against terrorism and to put an end to the terrorist presence on their territory, which poses a threat to neighboring countries and diplomatic missions,” it has zanelled, in apparent reference to the Kurdistan Workers’ Party (PKK).

During the aforementioned session at the UN Security Council, Iraqi Foreign Minister Fuad Hussein called on the international body to pass a resolution to force the withdrawal of Turkish military from the north of the country and denounced that the attack in Zajo was “a flagrant aggression by the Turkish Army against innocent civilians” and “a military aggression against the sovereignty, security and territorial integrity of Iraq.”

Thus, he recalled that the presence of Turkish troops in Kurdistan is “illegal”, since it does not have the approval of the Iraqi government and is not part of a security agreement, before stressing that Baghdad is “totally willing” to work with the UN and other countries to expel the PKK from its territory and acknowledged that “its presence causes insecurity and creates instability in Iraq”.

Turkey announced in mid-April the start of a new offensive against the PKK in Iraqi Kurdistan, in northern Iraq, which was described by Baghdad as a “threat to national security”, given that the operations were not being coordinated. The Turkish Army also recurrently conducts military operations against the PKK and its allies in northern Syria since the ceasefire between the government and the armed group was broken in July 2015.