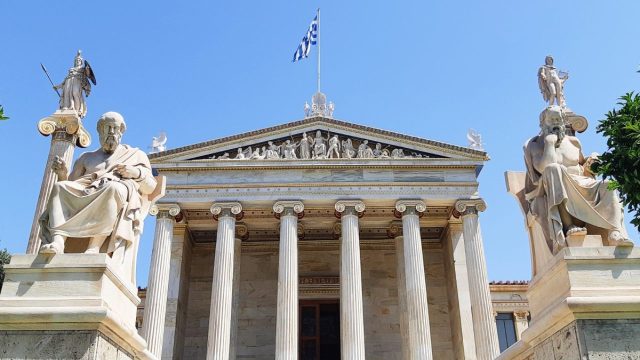 You may know the basics about Socrates, Pericles, theater, and science, but how many details do you know about the daily life of the ancient Greeks?

Here’s a list of interesting things you probably didn’t know about this great civilization of the past.

1. The ancient Greeks used to add water to their wine

Wine was at the heart of ancient Greek culture. In the Pantheon there was even a god of wine, the god Dionysus. However, it was considered arrogant for mortals to get drunk; a custom suitable only for barbarians. It was believed that only the god Dionysus could drink wine without water and not get drunk.

If the mortals did not mix their wine, there was a danger that they would become violent and lose their minds. So what did they do? They were adding water to their wine! Thus, they could drink a lot of wine without getting drunk… or at least that was the idea. In the winter, to save water, they put snow in buckets.

2. There was only one mother for all the ancient Greek monsters

Most of the famous monsters in Greek mythology had the same mother! Echidna, the mother of monsters, was half a woman and half a snake. Echidna and her partner Typhon, a monstrous serpentine giant, tried to overthrow Zeus for world supremacy. Zeus, with his lightning bolts, managed to defeat them and punished Typhon by burying him under Mount Etna. Echidna and her descendants lived to challenge many future Greek heroes.

Some of her descendants were: Cerberus, the three-headed dog of Hades, the guardian of the Underworld; Lernaean Hydra, the serpentine water monster who was killed by Hercules; Chimera, the hybrid creature that blows fire; the treacherous Sphinx who would kill anyone who would answer his riddle wrong.

It may come as a surprise to many, but there is no toilet paper in ancient Greece! The list of things that people from different cultures of the world used before the invention of toilet paper is truly endless. Includes tree leaves, corn, coconut shells, sheep wool and cloths, sponges tied to sticks or water. But without a doubt, the ancient Greeks are the ones who make the difference! For special hygiene purposes, they used stones, pebbles or ceramic pieces. Useful information to remember if you have ever camped in the woods or on a beach and are out of paper…

Read:  VIDEO When and where you can see Prey, the natural continuation of the Predator franchise: what it's all about

4. The ancient Greeks may have been partially colorblind

Homer, in his famous works Iliad and Odyssey, describes the Mediterranean Sea as “dark as wine.” Homer, in fact, names only a few color terms and uses the same colors to describe objects that look quite different. According to Mark Bradley, an associate professor of ancient history at the University of Nottingham, color worked very differently in antiquity than we are accustomed to today.

The ancient Greeks had two different conceptions of time, using two different words: chronos and kairos. The first refers to time as we know it and we measure it today, chronological time. The latter signifies an opportune or opportune moment for action. In other words, the right time to do something. Unlike chronos, which is quantitative, kairos has a qualitative nature. The ancient Pythagoreans believed that Kairos was one of the most fundamental laws of the universe. In Aristotle’s scheme of rhetoric, kairos plays a very important role. For him, kairos is the context of time and space in which the evidence will be delivered.

The beard was a symbol of prestige for a man. Their care was of the utmost importance but also a subject of competition between men, which made good hairdressers highly sought after. The ancient Greeks, in fact, considered the beard a symbol of manhood and wisdom.

Hair was considered by them to be the most valuable part that the human body could produce; they believed that hair gives power to the dead for their journey into the afterlife. On the other hand, hair loss for the ancient Greeks was not a bad thing. On the contrary, it was an indication of their wisdom. This is why most statues depicting philosophers are hairless.

Read:  An interesting new Disney + series: When You Can See Willow

7. Ancient Greek women adorned themselves as they do today

Women in ancient Greece paid close attention to their appearance. They dyed their hair blond and added curls using a hot iron. They plucked their eyebrows with tweezers, painted their faces white with lead carbonate, and accentuated their features — especially their eyes — using mineral and vegetable dyes. Bronze mirrors, ivory combs, small perfume bottles and jewelry and cosmetic boxes completed the range of accessories for women. “Waxing” was also common for them. They used flint razors, tweezers, creams and stones.

8. The ancient Greeks were very superstitious

The ancient Greeks were very wise, but they were also very superstitious. Superstitions have played an important role in their daily lives. Some days of each month were considered ominous, so they avoided important tasks such as sowing or marriage. They also took steps before performing certain tasks so as not to anger the gods. For example, they prayed before crossing a river.

However, there is one superstition that has survived to this day in Greece! The so-called “eyes”. It is still believed by the Greeks that one can cast a bad eye on someone out of envy and jealousy. Eyewash symptoms include dizziness, severe headache and yawning. The good news is that the “spell” can be broken by someone who knows how to cast a spell.

Honey and pepper were the ultimate ancient Viagra! In ancient times, there were a number of preparations designed to improve the sexual performance of men. Some of them allowed them to have a permanent stimulation. Honey in combination with pepper was one of the most common and effective solutions.

Pregnancy tests are not an invention of modern times. The ancient Greeks had a rather unusual method of detecting whether a woman was pregnant using a clove of garlic and watching the smell of her breath.

Another test comes from the great physician Hippocrates, who believed that the administration of honey with water could have certain results. The woman would drink a glass of water with honey diluted before bed and the test would be positive if she had bloating and cramps during the night.