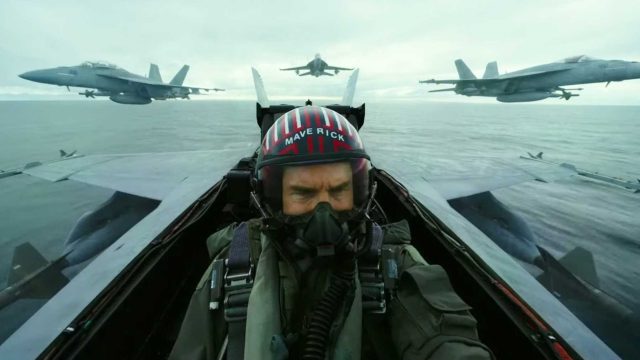 A new video from The Late Late Show with James Corden shows the host of the show terrified of a real experience with the fighter jet, along with the star of Top Gun: Maverick, Tom Cruise. The actor promoted the new sequel to the 1986 film Top Gun, along with a cast that included Val Kilmer, Tim Robbins, Kelly McGillis, Anthony Edwards and Meg Ryan.

Top Gun: Maverick is in theaters

Cruise had fun pushing The Late Late Show host Corden out of his comfort zone. Most notably, while promoting Mission: Impossible – Fallout, Cruise took Corden skydiving. During that experience, Corden was visibly terrified, jumping off the plane in a tandem parachute jump, while Cruise jumped solo with him. Corden finally admitted he never jumped off a plane again. However, Cruise seems to have found a new way to scare the host of the nightly talk show.

A new video from The Late Late Show with James Corden shows Cruise flying a fighter jet and Corden as his passenger. Cruise begins with a light flight, but as another plane approaches, a simulated fight begins, leaving Corden terrified. As the video continues, they take a break before switching planes and taking off in a set of fighter jets. Watch the video of the Top Gun experience at the Late Late Show below:

Read:  The city where it is 'forbidden to die'. The place dubbed the 'Harbor of the Apocalypse', the northernmost settlement in the world

Cruise holds several pilot’s licenses, making him more than qualified to fly the planes seen in the video. Cruise used the same skills for Top Gun: Maverick, where he flew real planes for the movie.

Top Gun: Maverick is now in theaters after numerous delays due to the COVID-19 pandemic.