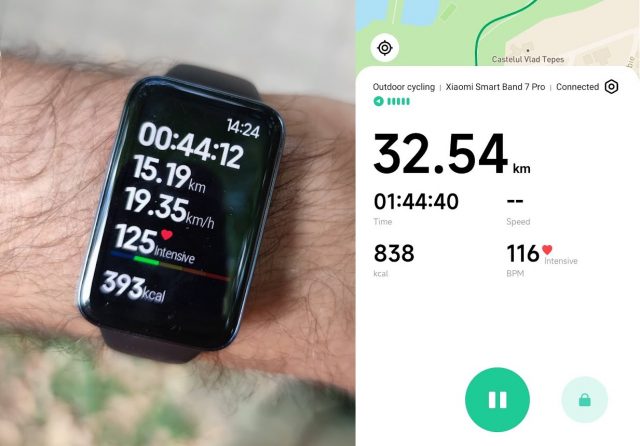 The Xiaomi Mi Band 7 Pro is a fitness accessory that comes in the package of a sleek smartwatch, light enough not to get in the way during activities, but not so small that you lose the functionality expected from a modern gadget. Plus, the battery life isn’t too shabby either, with the Smart Band 7 Pro being able to stay on hand for up to two weeks without having to fumble for the power cord.

The Mi Band 7 Pro is very similar in capabilities to the “standard” Xiaomi Mi Band 7 version, the main difference being that the Pro version cannot be purchased officially in our country, but only through online stores that offer European delivery services. Also, “pairing” the device with the Mi Fitness app installed on the phone requires setting the “China” region in the app. The solution has two drawbacks, namely that you won’t be able to use your new Smart Band to pay for groceries at the store, nor to send voice commands to the phone, as the software activates the China versions of these seriques. Presumably, if Xiaomi decides to release the Smart Band 7 Pro for the European market as well, these drawbacks will take care of themselves. Instead, you get sensors for your pulse rate, blood oxygen saturation, sports and sleep monitoring functions, as well as a GPS for recording the routes you run. The 1.64″ screen comes with an always-on function, and while it doesn’t look much bigger on “paper” (compared to the 1.47″), it’s much wider than the base model. So the Mi Band 7 Pro comes with an even bigger screen, metal construction and a selection of sensors and functions for monitoring sporting activities. Sized at 235 mAh for an overly add to the thickness of the case, the battery promises up to 12 days of use on a single charge. Unlike the Smart Band 7, the Pro model also benefits from NFC for contactless payments.

Read:  OSOM V1 will come with a secure USB cable that can stop data transfer on demand

Ready for any usage scenario, the Band 7 Pro comes in a water-protected casing that should withstand up to 50 metres of water. Another commendable aspect is the very convenient mechanism for detaching the wristband, by pressing the button at the base of the soft rubber strap, for example replacing it with one of the optional colours. The AMOLED display supports 456x280p resolution and is protected under scratch-resistant mineral glass with a high-quality oleophobic coating that limits fingerprint retention and improves visibility. The screen is not very bright, but can be seen without problems even in direct sunlight.

The touch interface is rendered as a list with one or two rows of icons, with good display density and large fonts greatly aiding the aesthetic appeal and ease of use. While not as fluid as on a high-end smartwatch, the interface is lag-free and responds well to touch commands.

Important to know, most of the sports features come disabled by default and for use must be turned on from the Mi Fitness app, many of these come with information about a certain “cost” in terms of battery life. Unfortunately, even when using the accessory with a Xiaomi phone (the Mi 10T Pro model), I had quite a bit of trouble with the phone’s “optimizations” for preserving battery life, with the Mi Fitness app often being forcibly closed, resulting in it stopping syncing with the sports function checked on the Smart Band. The problem was only remedied big hassle by unchecking several difficult-to-find battery-saving settings on the phone. The Xiaomi Mi Band 7 Pro supports no less than 117 types of sports, including running, walking, climbing, cycling and more. It can record many types of sports, from relatively common activities to performance sports, with pulse and oxygen saturation sensors helping a lot in measuring and dosing the level of exertion. For example, the accessory can be set to vibrate to alert you if your pulse rate has been too high for too long, or your oxygen saturation has dropped to a level that is dangerous to your health. You can also activate the automatic sports recognition function, which will try to determine the activity you’re doing by analysing your heart rate, for example, differentiating between running, rowing or cycling. The advantage is that you don’t have to manually start recording the activity, as it is automatically selected from the list of those activated on your device.

Read:  EU could force phone manufacturers to offer software and hardware support for up to 5 years

As for the GPS tracking function, it doesn’t require syncing with your phone and supports simultaneous Beidou, GPS, GLONASS, Galileo and QZSS search, trying to determine your real location as accurately as possible. For example, you can do your outdoor running sessions without your phone, reducing the amount of equipment needed for exercise. Mi Band 7 Pro can monitor critical health data such as heart rate, blood oxygen, sleep and stress. Custom alerts can be set to help you understand and adjust your physical health. For example, turn on smart heart rate monitoring. Once you activate this feature, your heart rate will continue to be monitored and alerts will appear if your heart rate is too high or low.

The gadget can be ordered from the Hekka Store offer for $85.99 and $75.99 respectively by using the code discount01 Delivery from a European warehouse is free of charge and duty free. You can also use the code hekka29-10 For a $10 discount on any item purchased in the Hekka store, with a minimum value of $29.