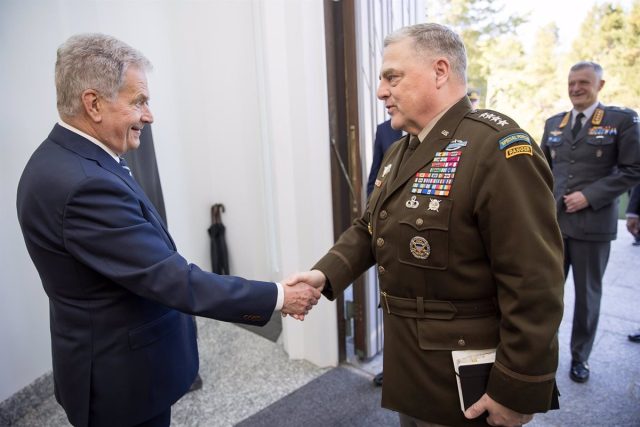 The head of the Joint Chiefs of Staff of the United States Army, General Mark Milley, began a tour of Finland and Sweden this Friday to support the request for entry of both countries into NATO as a protection measure against the Russian invasion of Ukraine, and right now paralyzed by Turkey’s veto.

Milley has started the round of meetings in Helsinki, where he has met with the country’s president, Sauli Niinisto; with Defense Minister Antti Kaikkonen, and with his Finnish counterpart, General Timo Kivinen.

The Finnish president has valued the “strong support” that General Milley’s visit represents “for the incorporation of Finland into NATO”, and the “bilateral defense cooperation between Finland and the United States”, as he has made known in his Twitter account. Twitter.

Milley will then travel to Sweden, as part of the Baltops military exercise, which begins on Sunday in the southern Baltic Sea, and the 500th anniversary of the creation of the Swedish Navy. There, Milley will hold meetings with his Swedish counterpart, General Per Micael Bydén, and Defense Minister Peter Hultqvist, reports the daily ‘Svenska Dagbladet’.

The Turkish government, through its deputy foreign minister, Faruk Kaymakci, insisted this week on its position on the accession of both countries by reiterating, as a fundamental condition for lifting their veto, that Sweden and Finland withdraw the supposed support they offer to the Kurdish forces, considered terrorists by Ankara, and stop demanding that the sale of weapons material to Turkey be restricted.

“Sweden and Finland have to realize that they are becoming members of an alliance in which we all have to fight for and for each other. This means that you cannot have your terrorist or we have ours. We have to have a policy very clear against all kinds of terrorist groups,” he said in an interview with Europa Press.

Michael Meyers - January 31, 2023 0
James Cameron's Avatar: The Way of Water continues to make a massive impact a month and a half after its theatrical release. Just days after...