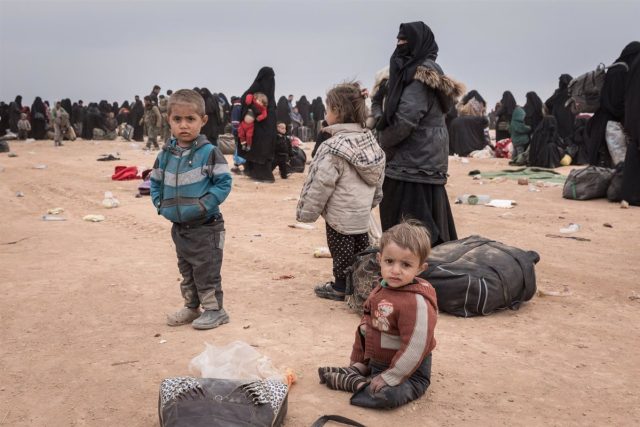 The United Nations has warned this Monday that 50 percent of the population in the Al Hol displaced persons camp, located in northeastern Syria, are children under the age of twelve and has called on the various governments to speed up the repatriation process. given the risk that the situation poses for the region and the world.

The United Nations Assistance Mission for Iraq (UNAMI) has indicated in a statement that a high-level delegation from the agency visited the site on Sunday accompanied by the head of the Iraqi National Security Service and has stressed that it was able to “witness first-hand the harsh conditions on the ground.

Thus, he has reviewed that the camp, in which about 56,000 people live, “is a desolate and growing complex of tents under a scorching sun”, while emphasizing that “many people, particularly children, They never asked to be a part of this desperate situation with no end in sight.”

“They are disenfranchised, vulnerable and marginalized. Already precarious security and humanitarian conditions have deteriorated in recent months, making the risks associated with this slow-moving catastrophe increasingly clear,” he said. “A camp like Al Hol feeds resentment and inspires terrorists,” she warned.

The UN special representative in Iraq, Jeanine Hennis-Plasschaert, has argued that “keeping people in constrained conditions and poverty creates greater protection and security risks than moving them back in a controlled manner.” “Iraq is showing that responsible returns are possible by finding dignified solutions anchored in the principles of accountability and reintegration,” she said.

“The best and only solution is to control the situation, manage returns quickly and decisively, in a spirit of collaboration, to prevent the legacy of yesterday’s fighting from fueling tomorrow’s conflict,” Hennis-Plasschaert said, according to the statement published by UNAMI on its website.

The UN humanitarian coordinator in Syria, Imran Riza, has expressed himself along these lines, emphasizing that “Al Hol is not a place for children.” “The steps taken by the Government of Iraq are extremely important on a path towards solutions. Action by other member states with citizens in the field is urgently needed,” he explained.

To date, more than 2,500 Iraqis have been repatriated from the camp, while another 28,000 remain at the site, which is home to citizens of 51 nationalities. For this reason, the UN has requested that the transfer processes be accelerated, always guaranteeing “appropriate measures of justice and accountability, in line with International Law, and community reintegration programs for those declared innocent of any crime.”

The non-governmental organization Save the Children warned in March that it would take 30 years for the repatriation of all the children who are in camps for displaced people in northeast Syria if the current pace continues, amid complaints about the deterioration of the situation in these facilities.

The Syrian Democratic Council (SDC) –political arm of the Syrian Democratic Forces (SDF)– and the Autonomous Administration for North and East Syria (AANES) have been asking for years for help to control the situation in the Al Hol camp and other similar camps after the fall of the Islamic State ‘caliphate’, both for humanitarian and security reasons.

The security of the camp falls to the SDF, whose main component is the Popular Protection Units (YPG), which have protested on numerous occasions due to the lack of support to deal with this situation, marked by security incidents, attacks and attempts to leak in the last few months.

The SDF, supported by the international coalition led by the United States, took the Syrian city of Baghuz (east) in March 2019, which meant the fall of the territorial caliphate of the Islamic State, which thus lost all the areas it controlled in Syria and Iraq, after his defeat in this country in December 2017.