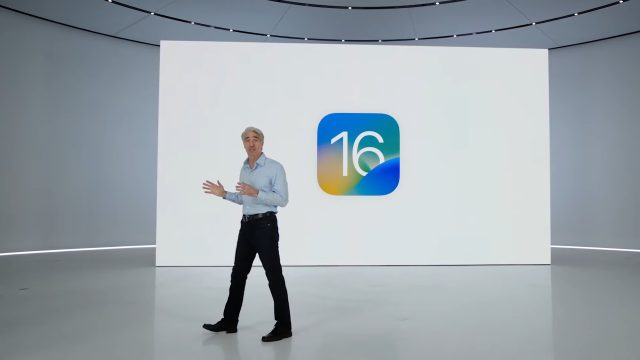 Apple announced at WWDC 2022 the first official information about its new operating systems that will be launched this fall. These are iOS 16, iPadOS 16, macOS Ventura and watchOS 9. With the launch of these operating systems, Apple further pushes the idea of ​​ecosystem, online collaboration and personalization, offering something new for each device. The launch of iPadOS 16 in particular will mark the upgrade of iPad devices from simple mobile platforms to true productivity computers.

The new iOS 16 will be one of the most important updates launched by Apple in recent years for smartphones. It will significantly change the lock screen, something that has not received significant improvements since the launch of the iPhone X in 2017. For the first time in iOS history, Apple will allow more customization than just changing the background. The customization interface is inspired by the one on watchOS, which allows you to add photos, change fonts and colors, and attach widgets that provide quick information right on the home screen. Everything is done quickly, just like clockwork, and users can save multiple lock screens to change them at will. Notifications now come at the bottom of the screen, providing a better organized design with no clutter at the top.

Also at the bottom are the new Live Activities, which can quickly show the progress of certain applications, such as the distance the Uber car ordered, or the food order, or even the score of a sports match you are watching. These Live Activities will be able to be integrated by developers into applications based on an API. The same goes for widgets. Focus profiles can thus have, in addition to custom application and notification screens, dedicated lock screens for each mode. This way, you can completely separate your work mode from your personal one, or from the one for when you want to relax. These focus profile filters will be able to change the content displayed in applications such as Messages, Mail or Safari.

SharePlay, a feature that debuted last year in iOS 15, allows you to watch content directly from Face Time with friends, now works in Messages and you can switch to compatible Share Play applications directly from text conversations or video chats. TikTok and Disney + are some of the apps that are compatible with Share Play. Apple seems to be trying to offer some advanced features that Google used to specialize in. For example, dictation receives new features, allowing text editing with the physical keyboard and voice simultaneously. This way, you can correct texts faster. By the way, the dictation on iOS will now put punctuation marks and emoji, if you want that. And developers will be able to integrate application functions directly into Siri, without the need to create voice shortcuts through the Shortcuts application.

Live Text, another feature that debuted in iOS 15, now allows you to copy text not only from photos, but also directly from videos. Also via Live text, Apple will allow translation directly from the camera app. And the Live Text-enabled Ai features can now cut only certain elements of a photo, such as a person, or an animal, to be used in another application, just with one touch, without other photo editing software.

Apple also talked a bit about Wallet and Apple Pay. The company is already integrating ID cards in 2 US states and another 11 are about to adopt this technology. Where this feature is available, applications that require ID verification will be able to verify the age of users directly from the “digital bulletin” on the Wallet. Also, virtual keys for cars, hotels or offices, can be sent via iMessage or Mail, with iOS 16. Apple Pay will launch Tap to Pay in the US this month, and can pay with an iPhone, phone or contactless card without a POS. It is only necessary for the seller to have an iPhone to collect the money. Apple is also announcing Apple Pay Later, a feature that can split the cost of a transaction into up to four installments, which can be paid later. And on this occasion, merchants who accept payment via Apple Pay can provide real-time order tracking in Apple Wallet directly, without a dedicated app or website. Shopify will be the first platform to do just that.

Apple Maps receives new and improved maps in 11 new countries, not in Romania, and detailed maps come to many US cities. Things that will be available everywhere are the ability to add up to 15 stops to a single route and the ability to add stops along the way using Siri via CarPlay. Apple Maps will also be able to calculate your transit costs, as well as automatically access the access cards you have stored in your wallet. Next comes the integration of transportation services in Apple Maps, presenting the integration with BIRD, the scooter and bicycle application from Uber.

Read:  3 unique electronic devices available at a discount at Altex

Photo sharing in Photos will be improved, CarPlay will be completely redefined

Photos will receive some very useful features, especially for families. Apple will offer the ability to create an iCloud Shared Photo Library, where all shared photos of a family automatically end up. However, not all photos get there automatically, only the ones you want to share with family members. In fact, there are filters, such as photos in which everyone is together, or which were taken when you were on the same vacation, and so on. There is also the possibility to detect the phones of nearby members to determine whether or not it is a family photo. In the camera application you can set before taking the photo whether it is a shared or a private photo. And edits made on a member’s device are automatically transmitted to others.

One of the most important new features in iOS 16 will be the new CarPlay, which, unfortunately, will probably not be accessible until next year. This is because compatible cars will not be launched until the end of 2023. However, Apple talked about the new interface, which automatically adapts to the size and shape of each screen in the car. Unlike other systems to date, next-generation CarPlay is displayed on all car screens, including the dashboard clock area. This allows users to customize the shape and display of their watches. Apple’s partners that will integrate this new technology include Jaguar, Land Rover, Mercedes, Porsche, Nissan, Ford, Renault, Volvo and other mid-range and premium brands.

Apple also talked about some new features, such as Quick Notes, the quick notes feature on iPadOS 15, which also comes on the iPhone, new smart home features through the completely redesigned Home app and integration with Matter technology, as well as protection for people with problems family abuse, which can quickly block other users from accessing their personal device, whether they’re connected to the same family via iCloud.

iOS 16 comes in the fall, most likely in September, along with the new generation iPhone 14. But Apple has not talked about new phones. The beta for developers will be available today, while regular users will be able to test iOS 16 in July.