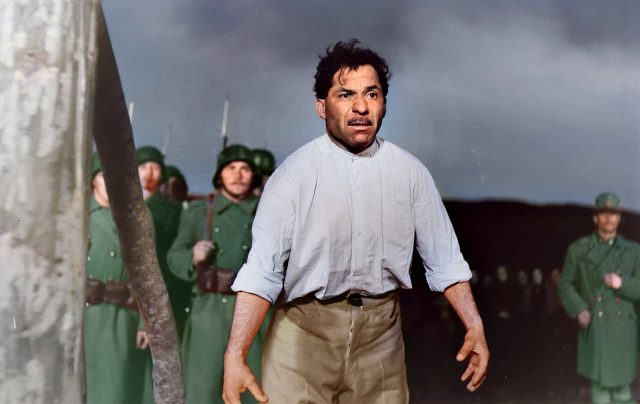 “I am a peasant. A schoolboy, but a peasant”. This is how Mihai Mereuță characterized himself every time he told about his life, even though he was one of the greatest actors of Romanian theatre.

Mihai Mereuță was born in Santa Mare, Botoșani, on November 29, 1924, also from a peasant family and attended the first primary school classes in his native village. Then he went to Iași to attend high school there and did not stop until he finished two faculties – the Faculty of Letters and Philosophy and the “George Enescu” Conservatory in Iași.

Arriving in Iași to take an exam, the future actor felt the need to change his shoes for a pair of boots.

“When I came to Iasi for high school, I took off my shoes at the Iasi barrier, put on a pair of boots and took the high school exam,” he recounts.

He finished both faculties in 1948 – at the Conservatory he even had the opportunity to graduate two years in one – and was hired as an actor at the National Theatre of Iași.

Read:  Dacia, a major force in Europe: the giant from Mioveni can no longer be ignored After some time he was hired at the Theatre of Ploiești (nowadays Toma Caragiu Theatre) where he received the confirmation of his acting talent in the play “O scrisoare pierdută”, playing the role of the tormented citizen.

Arrives in Bucharest at Bulandra’s request

In 1957, Mihai Mereuță arrives in Bucharest at the request of Lucia Sturdza Bulandra.

In an interview later, the actor talks about human quests: “There has always been a tendency for people to escape. It depends on how and in what situation. Didn’t Brâncuși and Enescu escape? And then there’s that Moldovan, Palade (n.r. George Emil Palade), who, if he had stayed here, would have been a simple biology teacher in Urziceni, whereas he won the Nobel Prize. People have always tried to escape from what is minor, what does not satisfy them intellectually and spiritually. They have tried to reach another world, another sphere of understanding. Man feels the need to escape from the banal.”

He plays alongside other great Romanian actors, including Ion Caramitru, Margareta Pâslaru and Toma Caragiu in “Opera de tre parale”. In 1967 he teaches the acting class at IATC with Constantin Morozan.

Her work in the theatre world was complemented by hundreds of roles in radio plays: “There Came a Mill on the Siret”, “The Doctor’s Customs”, “Moromete’s Youth”, “Dead Souls”, “A Lesson in Common Sense”, “Nastratin Hogea’s Nastiness”, “Maitrey”, “The Infernal Machine”, “In Time of War”, “Ion”, “The Intruder”, “Ion Roată and the Union”, “The Deserted Genius”, “Twelve Chairs” and over fifty roles as a film and television actor: “The Hanged Man’s Forest”, “The High Schoolers”, “Rock & Roll High Schoolers” or “The Party”. In 1992 he made his last film appearances in “Two Outlaws and a Hunchback” and “Where are you running off to?”.

After retiring in 1991, he retired from acting, but continued to work in films and radio. He was also present on television with the show Ferma, dedicated to agriculture, on TVR2.