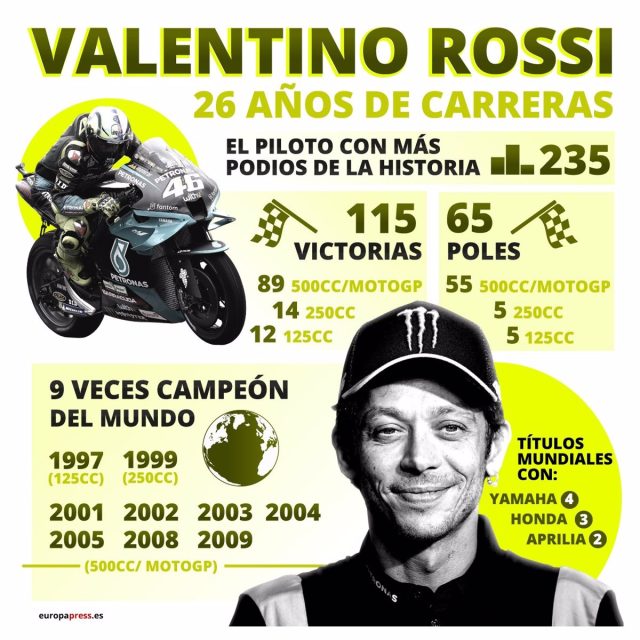 Cheste put an end to a long guard duty for ‘Il Dottore’ Valentino Rossi on the tracks this Sunday, but the legacy of the nine-time world champion will live on in the annals of motorcycling and motorsport history, not only because of his unparalleled titles and numbers but for his charisma and for his magnet to attract fans to a sport that catapulted.

Valentino Rossi knew how to open frontiers in the world of motorcycling and, with his talent on the asphalt and his spark and character outside of it, he was able to be admired from his native Tavullia where as a boy he heard the engines of the nearby Misano throughout Italy and more there. He is a world icon and considered by many to be the best driver in history.

Like all myths, he will not leave the paddock immediately but will continue in the World Championship at the head of his teams and watching over his own academy drivers. As a pilot, his future may lie, as he himself foresaw, in the four wheels. But as a living history of motorcycling, he will not put it aside and will continue signing autographs and taking photographs wherever he goes.

Magic often accompanies geniuses like Rossi and fate has wanted that, despite vigorously pursuing round figures, his idyll has been with the number ‘9’. Yes, because beyond having won that astronomical number of world titles, if you look only at the premier class, he has achieved 89 victories between 500cc and MotoGP and with 199 podiums. Staying one title away from the 10, a victory from the 90 and a podium from the 200. This is how the legend is forged, too.

Read:  Sergio García Dols assaults the leadership of Moto3 with his victory in Portimao

And like every myth or protagonist that has its enemy or antagonist, ‘Vale’ cannot be different. With his yellow ‘tiffosi’ defending him tooth and nail in the multiple grandstands of the circuits he has passed through, he has had to face great rivalries on the track that, on occasions, have crossed that line to become enmities and battles sometimes occurred on the track and in the press.

Perhaps the biggest battle he experienced was with his compatriot Max Biaggi, with whom he fought to earn the esteem of the Italians even before winning the 500cc title. No one doubts who won that duel he had in Suzuka (Japan), in 2001, the most tense moment between elbows from Biaggi and Rossi’s ‘comb’.

Character has never been lacking for a Rossi who is a great champion on his own merits but who has always been haunted by a certain fame of, despite his eternal smile, being unable to forget braids, perhaps being somewhat spiteful. Ask Sete Gibernau, who after denouncing that Rossi and his grill cleaning went to the ground, at the next appointment, after the Italian swore that the Spaniard would never win a single race again.

A ‘vendetta’ that Marc Márquez also suffered, in a case similar to that of Sete although multiplied. If Rossi and Gibernau were friends before their friction, Valentino was the childhood idol and reference of an incipient Marc with whom he got along wonderfully until the one from Cervera began to beat him and overshadow him. And with episodes such as the kick from ‘Vale’ to the ‘Tro de Cervera’ in Sepang at the height of that misunderstood rivalry.

Read:  The Government renews Formula 1 and MotoGP contracts between 2022 and 2026

The wall that he had put between the boxes of the official Yamaha team to prevent his teammate Jorge Lorenzo from ‘spying’ on him, or his duels with Casey Stoner are other moments to remember, on the negative side that is still negligible in comparison with all the good that Rossi has given to his fetish sport, which he somehow transformed for the better.

With Rossi new fans arrived who, with his departure, will continue to be regulars at the races. His fun character and positive attitude –except in those previous moments– has made his love for motorcycles grow. His well-known power of attraction made people get hooked on racing and Rossi was admired as much or more than the stars of other more mediatic sports. And his talent, his magical overtaking like the one in the ‘Corkscrew’ from Laguna Seca to Stoner, will remain forever in countless retinas.

Alongside his nine champion bikes, eight of which he owns except a Honda, with a heartfelt tribute from Dorna -World Championship organizer- and with a surrendered Cheste at his feet, Valentino Rossi leaves MotoGP being a ‘ Legend’ (Legend) more than deserved and having triumphed in Honda and Yamaha. The only thing missing, to curl the loop, was to have won that tenth title with Ducati that never came, not even back to Yamaha, where he said goodbye suffering more than enjoying himself in a satellite team. ‘Thank you, okay’. ‘Ciao, okay’.