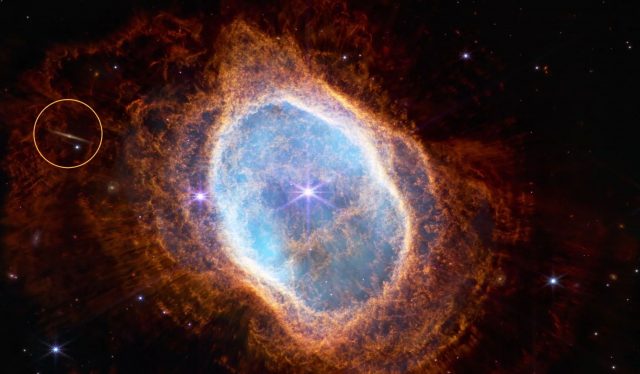 The James Webb Space Telescope is one of the inventions that have the potential to radically change science. The spacecraft is capable of taking very high quality images of distant features in space.

The first series of colour photographs received from the telescope not only impress with their beauty, but also with the detail they reveal. In one of the photos, astronomers observed a galaxy, which appears to be a spiral galaxy, imaged from the side.

The galaxy appears in the upper left corner of an image of the Caldwell 74 nebula, a massive cloud of stardust and gas 2,000 light-years from Earth.

Read:  Neeva launches in Europe. It's a new search engine with no ads in the results

NASA astronomer Karl Gordon thought the detail in the image was also part of the nebula, and even bet he was right. After studying the data more closely, he and his colleagues found that Gordon was wrong. The galaxy was accidentally photographed by the telescope. It was a kind of “photobombing” in space.

Its discovery will help researchers better understand how stars are arranged in galaxies.

The James Webb Space Telescope was developed by NASA, the European Space Agency (ESA) and the Canadian Space Agency (CSA), and the successor to the famous Hubble is due to launch into space on 25 December 2021.

Read:  After reconsidering the decision in times of pandemic, Samsung confirms that it will give up manufacturing LCD screens, permanently

The telescope is named after James E. Webb, NASA administrator from 1961 to 1968. He played an important role in the Apollo program, which put the first humans on the moon in 1969.

The telescope, which cost $10 billion, is now 1.6 million kilometres from Earth.

You can see the first images received from James Webb on NASA’s website.