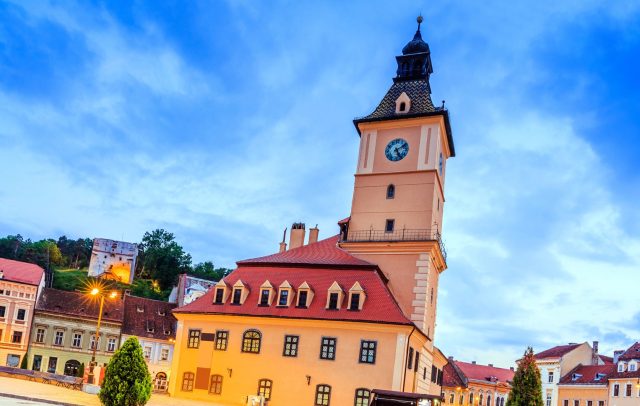 When you look at the map of Romania, it is impossible for you not to notice the city in the middle of it, which has a mountain right in its center. It has an impressive architecture and is full of history.

Brasov is one of the favorite cities of tourists, both Romanians and foreigners. It offers special landscapes to all those who step on its doorstep, especially if you reach Tâmpa. When we think of big cities, most of the time, the images of a polluted, gray city come to mind.

This is not the case with Brașov, which offers clean air, impressive views and an architecture that, in addition to its special beauty, has a lot of history behind the walls. This city is built around Mount Tâmpa, being the city that has a mountain right in its center.

Those who want a unique hike, can climb to the top, especially since there are several tourist routes of different difficulties. For those who do not want to move so much, they can call a cable car. Brasov is located at an altitude of 535 meters above sea level, while Tâmpa Peak rises to 960 meters.

Read:  Orphaned as a child and raised by nuns, she saw her home bombed in the war: the story of Sanda Toma, the actress with a life in the movies

The city of Brasov is built around a mountain

On the way down, you can reach Aleea de sub Tâmpa which is one of the most popular places of the locals, here often going for a walk in nature. And this place will give you wonderful views over the busiest areas of the city, while you can enjoy the fresh air.

The walls of the Citadel separate the city from the Alley below Tâmpa, with some of the city’s famous bastions. In the past, depending on their craft, the people of Brasov had a bastion where they met. The best known is the Weavers’ Bastion, which is located on the edge of the Olimpia Sports Base.

If you are on your way to the Center, you can visit one of the narrowest streets in the world, being the Sforii Street which has a width that varies between 1.1 and 1.35 meters. Then, you can pass by Poche Șchei and Poarta Ecaterina, these being two of the old gates of the city.

Read:  The European Commission is investigating the car industry: what the problems are

A few minutes away is the Council Square where you can find the famous Black Church, as well as the oldest high school in Romania, Johannes Honterus High School. Another attraction of the city is now represented by the Catacombs of Brașov, which have recently been transformed into a museum of new arts.

Also, if you arrive in the Historic Center of Brasov, you will discover that the architecture of the buildings is similar to that of the buildings in Vienna. Whether you choose to go in summer or winter, Brasov will always remain one of the most sought after tourist destinations that hides a lot of history behind it.