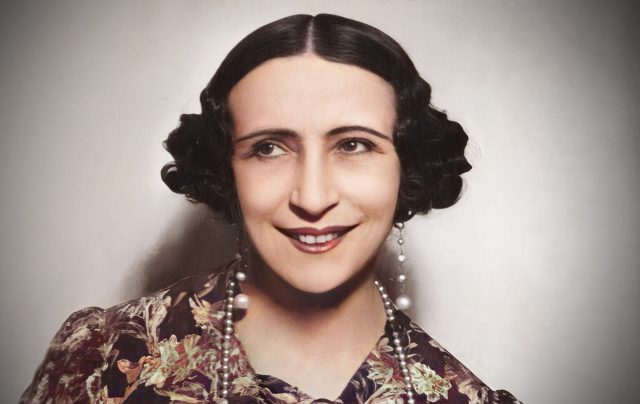 Maria Filotti passed away more than six decades ago, but she was to remain immortal in the collective memory of theatre and film lovers as one of the most important actresses of all time on the Romanian stage.

Maria Filotti was a perfectionist by definition, always subject to inner struggles. Like any great artist who respects the public but also respects herself, the great lady of the theatre used to live under the sign of questioning.

She was clear-headed to the core, extremely logical, temperamental and possessed an intelligence beyond the ordinary.

“The theatre of the past had the unfortunate tendency to confine the actor within the shell of a formula,” Maria Filotti once declared.

She was, by turns, Phaedra, Arkadina in The Seagull, Queen of England, Empress of Byzantium or “Lady with the Camellias”, but also Zoe in A Lost Letter or Veta in A Stormy Night.

About herself, Maria Filotti was to say that she was eternally dissatisfied with herself.

She was born in 1883, in the village of Batogu in the county of Braila, and later graduated from the Conservatory, despite her father’s opposition.

She went through many difficult periods of recent history

She has faced the most bitter years of history, seeing both world wars unfold before her eyes, as well as the era when Romanian theatre was transformed from an art form into a method of veiled political propaganda to the public.

About this, Maria Filotti said: “So English and Americans, zero. Russian or Soviet authors were out of the question. (…) In order to play French authors, they had to be passed through the censor’s bullhorn, who had to find that they were of guaranteed Aryan ancestry, which was not always possible. Unless it was an author who was playing in Paris under occupation, you couldn’t give the censors any guarantees (…) What was left? Naturally, the reservoir of Italian plays. As far as Italian authors were concerned, there was no question of their racial origin, as an author who had performed in Italy was a sufficient guarantee for the authorities.

Read:  Dacia Duster disappears, following Renault's decision, from the most promising market in the world. Where the famous Mioveni model will no longer be sold

Finally, the Italian theatre production of those years was a reservoir of hidden tendencies of protest against the ideology of the fascist regime, tendencies that were certainly indirect and very attenuated, but which nevertheless existed, and which made these plays closer to the feelings of our public”, according to the Metropolis newspaper.

The theatre in Braila has been named after Maria Filotti since 1969 until today.

Maria Filotti is the mother of writer and producer Ion Filotti Cantacuzino and the grandmother of actor Șerban Cantacuzino.

At her request, her house in Bucharest, located at 12 Vasile Pârvan Street, Sector 1, was transformed into a museum and opened to the public in 1965, trying to preserve intact the atmosphere of the artist’s lifetime.