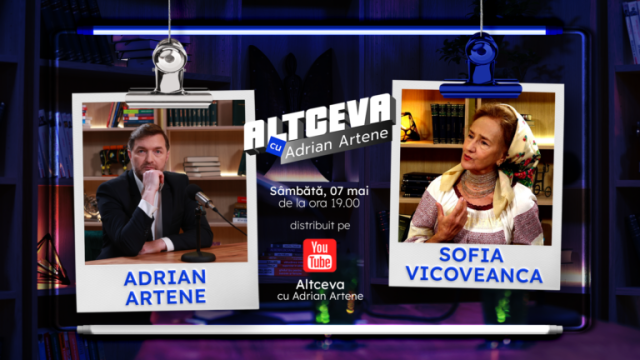 Folk singer Sofia Vicoveanca is invited to Adrian Artene in the podcast ALTCEVA on Saturday, May 7, starting at 19.00.

Sofia Vicoveanca – who was born in a locality near Chernivtsi (now in Ukraine), being one of the four children of the family of merchants Gheorghe and Veronica Fusa – told about how she met her father at the age of 7 after returning from the war.

She also talked about the holidays for her, the experience she had in Kenya and the fact that she is “married to Facebook”.

Watch the full interview with Sofia Vicoveanca, on Saturday, May 7, at 7 pm, only on the YouTube channel Altceva cu Adrian Artene.

Adrian Artene has been publishing in the national press since 1996. He has a double degree in Journalism and Law, and two master’s degrees in Theology and Criminal Sciences. He is the author of the book “State Mafia”, but also of the volumes of poems “Loves for which God also cried” and “The punctuation of love”.

Read:  Microsoft would like to bring widgets back to the Windows 11 desktop. Getting started with a Bing Search box