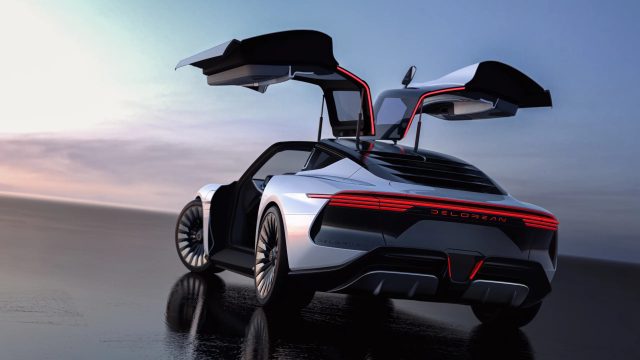 DeLorean Motor Company has finally unveiled the first full-length images of its first electric car, the Alpha 5. This doesn’t look exactly like the original ’80s right-angled model, as we’d expect, adopting a more modern design. with curved lines. However, the eagle-wing doors remain on the new model. The interior design seems to be minimalist, as we see in Tesla, and now, for the first time, we have information about the car’s performance.

DMC promised just a few months ago that it will unveil the car at the Pebble Beach Concours d’Elegance event, which will take place on August 18th. However, until then, we have the first images with the car, which seem to be 3D models rather than a real vehicle. But in three months we will see the real car.

Read:  ByteDance, owner of TikTok, accused of stealing photos and videos of Instagram and Snapchat users In addition to the overall design, the news related to DeLorean Alpha 5 is in terms of performance. DMC has released the first information about the speed, acceleration, range and battery capacity it plans for the final version of the car. It looks like DeLorean Alpha 5 will be a real competitor to the electric cars on the market. The car will accommodate four people inside, but is only available in a two-door version.

This will be a high performance electric car

Being a DeLorean, which is considered a sports car, the fact that it will accelerate from 0 to 100 km / h in just 2.99 seconds is not exactly surprising. Other electric cars boast similar performance. Interestingly, DeLorean also offers time for 0-88 miles per hour for Alpha 5, referring to the movies Back to the Future, where the car could only travel in time after reaching that speed. In the case of the new electric model, 88 miles, or 141 km / h can be reached in 4.35 seconds. The maximum speed of the DeLorean Alpha 5 is 249 km / h (155 mph) and will offer a range of at least 300 miles, or 482 km, with a battery of 100 kWh (or even higher). Some details do not appear to be complete, but estimates are made to the EPA standard without official certification.

This will probably be the only preview we have for DeLorean Alpha 5 before the official release in August. The official site is now open for early subscribers, but the company will open the site tomorrow, May 31, for everyone