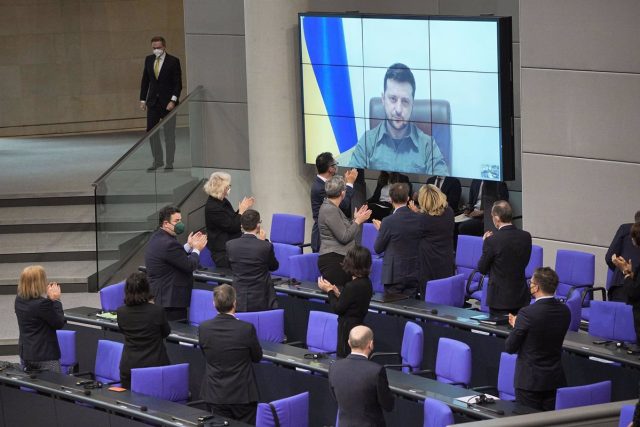 The President of Ukraine, Volodimir Zelensky, intervenes in the German Bundestag. – Michael Kappeler/dpa

German Chancellor Olaf Scholz reiterated on Thursday that NATO will not intervene militarily in Ukraine, after Ukrainian President Volodimir Zelensky demanded more support from Berlin in an intervention in the Bundestag.

Scholz, who thanked Zelenski for his “impressive words” before the German Lower House, indicated that, however, “one thing must be made clear: NATO will not intervene militarily in this war.”

During a meeting with NATO Secretary General Jens Stoltenberg, the German chancellor reaffirmed that Germany “is on Ukraine’s side” and stressed that Berlin currently supports Ukraine by sending weapons. “Germany is making her contribution and will continue to do so,” he said.

Ukraine has presented the German government with a long list of heavy weapons for its defense against Russia, including battle tanks, fighter planes and warships. So far, Berlin has sent mainly anti-tank and anti-aircraft weapons.

Read:  At least three dead in a knife attack in central Israel

Zelensky has said that Russia is building “a wall” in Europe with the attack that began on February 24 against the country, drawing parallels with the Berlin Wall and the Cold War, and has called on Scholz to “destroy” the wall and “Give Germany the leadership role it deserves.”

On the other hand, he has called on Germany to support kyiv’s request to join the European Union (EU) and has charged Berlin for delaying the cancellation of the Nord Stream 2 gas pipeline, which directly connects Russia and Ukraine. In this sense, he has criticized that all Ukrainian requests to abandon the project before the invasion received a single answer: “Economy, economy, economy.”

Read:  The Kremlin warns that it will not give gas "for charity" to countries that do not want to pay for it in rubles

For his part, Stoltenberg, before the meeting with Scholz, praised Germany for providing Ukraine with “many different types of support”, including military, financial and humanitarian support. In this regard, he welcomed the fact that the European country has welcomed more than 100,000 Ukrainian refugees.

In the face of the Russian invasion, NATO has reinforced its presence on the eastern flank and, in this context, has welcomed the contribution made by Berlin, which has deployed more troops in Lithuania and combat aircraft in Romania. “It is part of NATO’s swift, united and decisive response to this fundamental change in our security.”