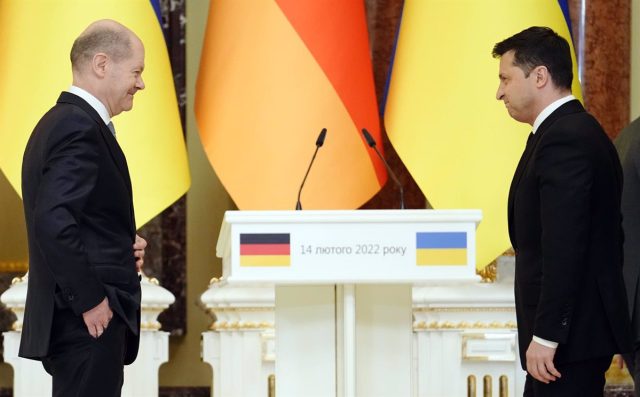 German Chancellor Olaf Scholz assured on Monday that there are currently no “plans” to admit Ukraine to Western alliances such as NATO, in full tension with Russia, which does not want Kiev to join the group.

“That is why it is somewhat peculiar to observe that the Russian government is making something that is practically not on the agenda the subject of great political problems,” said the foreign minister after meeting with the president of Ukraine, Volodimir Zelensky, in Kiev.

“This is, after all, the challenge we are facing now. The fact that something that is not an issue is now becoming an issue,” he continued, according to the German news agency DPA.

Within the framework of the talks -which have lasted almost two hours, longer than had been planned-, Scholz has offered Ukraine another 150 million euros in economic aid, in addition to another 150 million already committed but Berlin still hasn’t paid.

In total, Berlin has allocated more than 2 billion euros to Ukraine, but Scholz remains adamant in his opposition to sending weapons to Ukraine. Kiev has put pressure on Germany to give it arms, as other countries have done, such as the United States or the United Kingdom. However, the German government is opposed.

Read:  The mother of Shinzo Abe's confessed killer donated more than 700,000 euros to the Unification Church.

Scholz, who has remarked that no country in the world has given more economic aid to Kiev in the last eight years than Germany, has indicated that he has visited the country “in difficult times”, while reiterating that Germany “firmly” supports to Ukraine. In this sense, he has repeated the threats of sanctions against Russia if it invades Ukraine and has reiterated his calls for dialogue to de-escalate the situation.

Zelensky, for his part, has defended plans for Ukraine to join NATO, stressing that membership in the Alliance could make the country more “safe”, although he acknowledged that “unfortunately, not everything depends” on Kiev. .

Similarly, he stressed that the struggle to enter the Alliance is protected by the Ukrainian Constitution. “When we will get there no one knows, not even some members of NATO,” he added.

In addition, he has indicated that he has discussed with Scholz the need to include specific legal guarantees to protect Ukraine in the security architecture of Europe.

“The issue of security challenges and the peace process has been the main topic of our talks”, confirmed the Ukrainian president, who has insisted that it is in his country “where the future of the security architecture is being decided Union, of which our State is a part”.

In this sense, he has argued that Ukraine is a “reliable” ally and “a true outpost of democracy in the region.” “Without Ukraine, the creation of a functioning security architecture in Europe is impossible,” she concluded, according to the Ukrainian news agency Ukrinform.

Ukraine’s Foreign Minister, Dimitro Kuleba, has expressed himself along the same lines and has reiterated that Kiev’s intention to join NATO “remains unchanged”.

In a message published through his account on the social network Twitter, he insisted that the possibility of joining the Alliance “is enshrined in the Constitution and in the National Foreign Policy Strategy, with the support of a growing majority of Ukrainians. “. “It is only up to Ukraine and thirty NATO allies to decide on the issue of membership,” she has riveted.

The United States has warned that Russia could invade Ukraine “at any moment”, according to information from its own intelligence, due to the accumulation of Russian troops near the border with the country. Russia denies having any intention of invading its neighboring country.