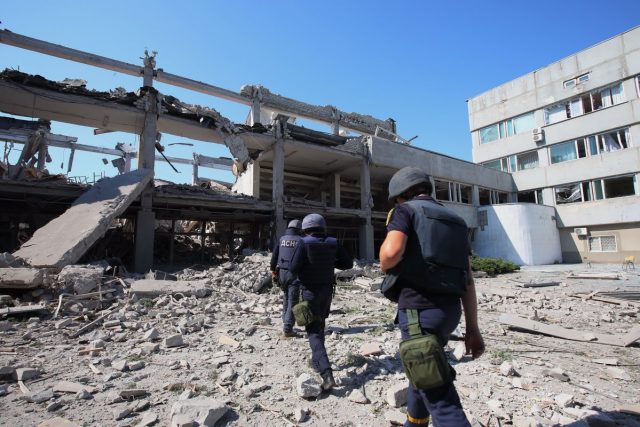 Follow here the latest news about the war between Ukraine and Russia since last February 24, when President Vladimir Putin gave the invasion order. If you want to see previous news, click on this other link.

Sweden and Finland have taken a step closer to NATO membership with the signing of their accession protocol, making them ‘de facto’ members of the military alliance pending formal ratification. “This is a historic day for Finland, Sweden, NATO and Euro-Atlantic security,” said NATO Secretary General Jens Stoltenberg.

On the other hand, the secretary of the Russian Security Council, Nikolai Patrushev, has stressed that Russia will achieve the goals of its invasion in Ukraine “despite the delivery of military aid” to Kiev by Western countries.

The parliament of the self-proclaimed Donetsk People’s Republic, controlled by pro-Russian rebels, on Friday approved lifting the moratorium currently preventing the execution of prisoners sentenced to death, about a month after handing down such sentences against two alleged British mercenaries and a Moroccan.

Germany’s Parliament on Friday approved the applications of Finland and Sweden to join NATO, a decision supported by the parties of the ruling center-left coalition and the conservative alliance between the Christian Democratic Union of Germany (CDU) and the Christian Social Union of Bavaria (CSU).

Lavrov denounces warmongering of Western community against his efforts to negotiate peace with Ukraine.

Russian Foreign Minister Sergei Lavrov denounced Friday that the Western community is trying to end the Ukrainian war “on the battlefield” instead of nurturing the option of a negotiated settlement, as the Kremlin is trying both in its attempts at political dialogue on the conflict and in other areas dependent on the conflict , especially the unblocking of Ukrainian grain exports.

Zelenski thanks Johnson for his support for Ukraine.

The President of Ukraine has thanked UK Prime Minister Boris Johnson for the “strong support” given in recent months to the Ukrainian authorities and people in coping with the Russian invasion.

EU accepts the validity of driving licenses of Ukrainian carriers and refugees.

The plenary of the European Parliament on Thursday gave the green light for the European Union to recognize the validity of driving licenses issued by Ukraine without the need for additional tests or equivalences, with the aim of allowing Ukrainian hauliers and refugees to continue driving without further formalities on EU territory for the duration of the Russian invasion.

Read:  Afghanistan and Pakistan form a committee for the conflicts on the Durand Line
17:21

Robles visits in Cartagena the ship ‘Ysabel’ that transferred armament for Ukraine.

The Minister of Defense, Margarita Robles, has visited this Wednesday in Cartagena both the Anti-Aircraft Artillery Regiment No. 73 (RAAA 73), in the barracks ‘Tentegorra’, and the Logistic Transport Ship (BTL) ‘Ysabel’ of the Army that a few weeks ago transported armament for the Ukrainian armed forces, via Poland.

Ukraine brings to about 36,500 Russian servicemen killed in combat.

Ukraine on Wednesday raised to “about 36,500” the number of Russian servicemen killed since the beginning of the invasion, including more than 150 during the last day of fighting, while confirming that “the enemy is advancing” in the Lugansk region, located in the east of the country.