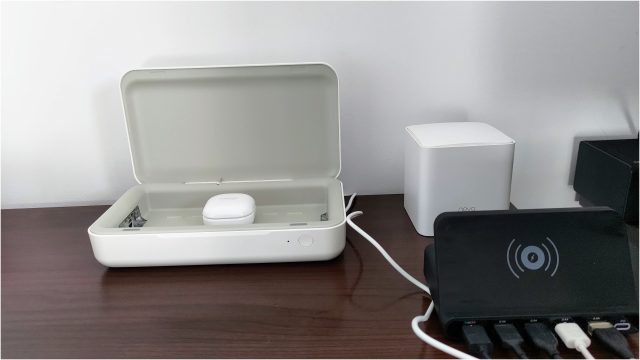 Mobile phones are some of the dirtiest things we often interact with. According to some studies, these devices have much more bacteria than the lids of toilet bowls. During the COVID pandemic, the sanitation of the objects we use frequently is very important.

To remove traces of dirt, grease and dust we can use a fine cloth with a mixture of water and isopropyl alcohol. But this method, although it gives the feeling of a clean device, does not guarantee the deep cleaning of each area, no matter how small. This includes sterilizers that use ultraviolet (UV) light, such as the one offered by Samsung (model GP-TOU020SABWQ), which we have recently tested.

UV light can kill viruses and bacteria, including the coronavirus that causes COVID-19 disease. The lamps used by many such devices are calibrated to emit light with a short wavelength (between 200 and 280 nanomers). Also called UV-C, this is the most harmful type of ultraviolet light. This type of radiation also reacts with the surrounding air, generating ozone, a gas with a strong oxidizing effect.

The Samsung Sterilizer is a white, plastic box with a sleek but spartan design. The text “UV Sterilizer” is engraved on the lid, and on the front side we have a start button and an LED. The device sits firmly on the desk thanks to the four rubber feet with which it is equipped. The Samsung brand appears only on the label on the base of the device. In fact, the device was not developed “in-house” by the South Korean company, but by an officially licensed partner.

Read:  Bitcoin has also become an officially recognized currency in an African country

The connection to the power source – which can be a power bank, laptop, phone charger or a charging station – is made via a USB-C port.

According to the manufacturer, the device operates at temperatures between 10 and 45 degrees Celsius.

A device with security systems

After opening the watertight lid, which uses a magnetic fastening system, we find a gray plastic interior. At the opposite ends of the interior are two lamps that emit UV light at a wavelength of 253.7 nm. In order for it to reach under the device placed in the box, on its base there are nine highlighted lines. Because UV-C light can be harmful, there is a system that automatically shuts it off when the lid is open during operation.

Between the lid and the box there are two rubber stops, which dampen the impact and reduce the noise when opening and closing the housing. Complete sanitation of a device takes 10 minutes. The appliance is placed in the box, then the lid is completely closed. After pressing the power button, a short sound is heard and the LED turns green. After 10 minutes, another longer sound announces the end of the sterilization session. The device must be completely closed to turn on the device.

Samsung UV Sterilizer can be used, in addition to phones, to clean other electronics and objects that fit inside it. Thus, I used the device to sterilize headphones, a remote control, smart watch and even cables. Smaller mice or USB sticks can also be inserted.

As we announced in the title, the Samsung device is a 2-in-1. At the bottom of the box is a wireless charging card that charges compatible devices when inserted into it. Thus, while being sanitized, wireless phones and headphones also receive power.

The wireless charger, which uses the Qi standard and has a power of 10 W, also works with the sterilizer lid open. Any device smaller than 196 x 96 x 33 mm may be placed on the plate.

Samsung UV Sterilizer is a useful product in any modern home. It sanitizes many of the devices we use every day and can charge wireless phones or true wireless headphones. The device comes with safety systems to avoid exposure to UV-C light, which can cause burns.

The only thing I don’t like is the fact that you can’t open the lid easily with one hand, because of the pretty strong magnetic system. When you have the phone in your hand, to put it in the sterilizer, you have to lower it to use both hands to open the lid of the device.

The tested product was made available to us by the online store MyTrendyPhone.ro.

– You can’t open the lid with one hand