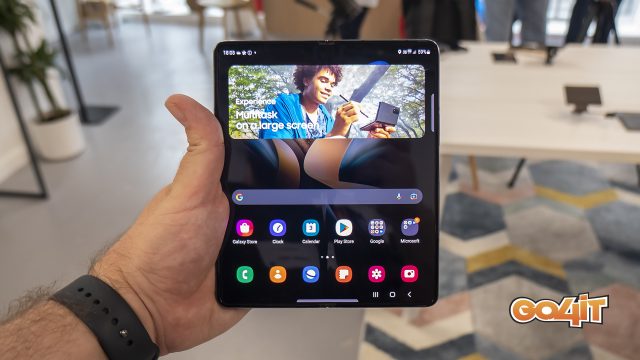 Foldable phones have been on the market for a few years now, but it’s only recently that we can say they’ve reached the “mainstream”, as about 10 million units are sold annually, most of them (over 7 million) from Samsung’s Galaxy Z series. But the South Korean company says it expects the Flip and Fold series of foldable phones to soon outsell the “traditional” flagship Galaxy S series, even after it was merged with the Note series with the S22 Ultra.

For Samsung, unlike other companies in the market, the foldable phone area doesn’t seem to be just an alternative to traditional smartphones, nor a secondary series for those who want a “different” device. Samsung sees this as the future of wearable devices, and by 2025, the company expects more than 50% of its premium mobile phone sales to be foldable.

Read:  There is already the first iPhone without a notch, with USB-C, headphone jack and fingerprint sensor. VIDEO

“By 2025, foldable devices will account for more than 50% of all premium smartphone shipments […] Foldables will become the new standard for smartphones.”, said TM Roh, President of Samsung’s mobile division.

These statements could have several implications. First, Samsung seems to be focusing more and more on traditional mid-range smartphones, where it really delivers impressive volumes. While its main rival in the market, Apple, has premium phones of the latest generation in the global sales charts every year, Samsung only reaches those charts with very cheap phones. Thus, production of Galaxy S phones could anyway decline in the coming years, and dedicated production capacity could be shifted to the Galaxy Z. In 2021, Samsung sold between 20 and 25 million Galaxy S21 smartphones.

Read:  Dragoș Bucurenci is invited to ,,Back to the future with Andreea Perminova'', Friday, September 30, at 19:00

Meanwhile, other companies in the market are either launching competing phones with production limited to a few units. These are generally saved for the Chinese market, where there is little competition from local brands. In the rest of the world, Samsung dominates the market, and being the first major brand to offer such devices globally could give it a long-term advantage when others start offering such devices.

Apple, which generally explores new directions only after they reach some maturity, seems to be absent from the foldable phone market. Meanwhile, Samsung seems to think that maturity is already here, or will come in the next couple of years.