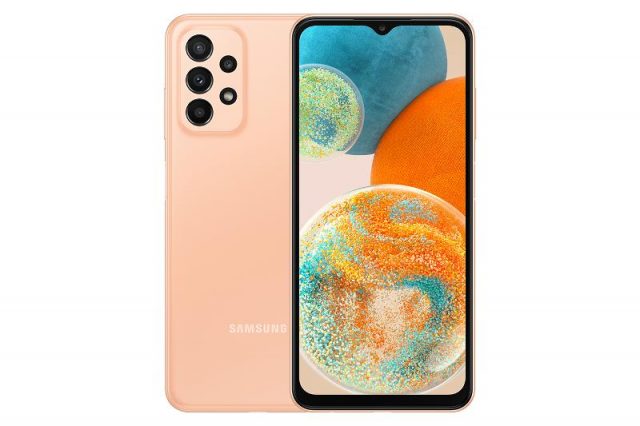 Launched in March, the Galaxy A23 arrived in stores in Romania with a price tag of 1549 lei, quite a lot for a 4G phone, the “upgraded” Galaxy A23 5G version corrects this shortcoming, while also delivering some extra performance at a roughly unchanged price.

Part of the same generation of chipsets, the Snapdragon 695 is just a slightly improved version of the SD 680 solution, with 5G connectivity as its main attraction. Equipped with Kryo 660 cores on the CPU side and an Adreno 619 series GPU, the new SoC offers 15% to 30% higher performance compared to the solution used with the non-5G Galaxy A23 version.

The Galaxy A23 5G comes directly with Android version 12 in the One UI adaptation. The phone has 4GB of RAM, but this is just the base equipment, there are also variants with 6GB and 8GB of RAM respectively. Storage options are split between 64GB and 128GB internal memory, expandable up to 1TB by attaching a microSD card.

Read:  Putin threatens tactical nuclear weapons. What arsenal Russia has and how dangerous the radiation from an attack is

Similar in design to the higher-end Galaxy A series, the A23 series is differentiated by the use of a less fussy LCD screen, framed by a slightly wider bezel and with the front-facing camera cropped in a “teardrop” style. So we find the same 6.6″ FHD+ screen with 90Hz refresh rate found on the 4G model, more than enough for a modern smartphone.

Unfortunately, in exchange for the price at least as high as the current model, the Galaxy A23 5G only offers a 50MP main camera and 5MP ultra-wide camera, with Samsung “padding” the specs list with yet another 2MP macro camera and the also quasi-useless 2MP DoF sensor. The front-facing camera isn’t great either, being limited to 8MP resolution. Another shortcoming is that the 4G version of the phone only supports 1080p/30fps (front/side) shooting, with Samsung making no improvements to this aspect.

Read:  Motorola is preparing the Moto G62, a new 5G phone for around 300 euros

Listed without a formal announcement directly on Samsung’s official website, the Galaxy A23 5G comes in color versions on black, blue, pink gold and white. It measures 165.4 x 76.9 x 8.4mm and weighs a respectable 197 grams. The recommended retail price is expected to be close to €300.