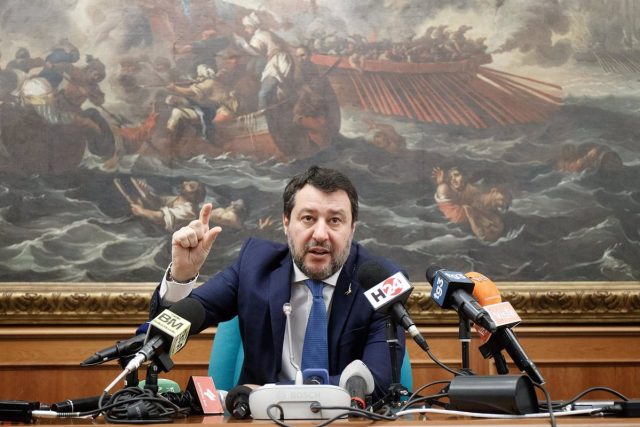 The former Minister of the Interior of Italy Matteo Salvini has questioned this Monday his presence for this Thursday before a court in Milan to answer for a crime of defamation after dedicating all kinds of disqualifications to the captain of the ‘Sea Watch 3’, Carola Rackete, during the crisis Lampedusa migration of 2019.

“We are the only country in the world in which a German woman piloting a ship carrying illegal immigrants rammed an Italian Army ship in an Italian port, with the result that the Interior Minister, not her, will have to go to court. court”, he criticized.

Salvini, leader of the far-right Northern League party and Minister of the Interior between June 2018 and September 2019, used his social networks to attack the reputation of Rackete, whom he accused of playing “politics” with the lives of human beings and called ” criminal” and “rich and pampered communist”.

For his part, in a statement Rackete has told the DPA news agency that he will not go to the Milan court where this Thursday Salvini will have to answer for these accusations of defamation and that he had no plans to do so during the process unless he is called to declare.

“I have absolutely no interest in wasting my time with Mr Salvini, but I believe that people have to take responsibility for their actions. Public representatives in particular must lead with integrity and advocate for justice and equality rather than foment hatred and division”, he settled.

Read:  Biden says HR "will always be on the agenda" during visit to Saudi Arabia

Rackete became known internationally after the decision to dock on the island of Lampedusa on June 29, 2109 the ship ‘Sea Watch 3’ with which he had rescued fifty people who were drifting two weeks earlier , despite the refusal of the Italian authorities.

For this she was arrested for a few hours, although she was later acquitted of all charges, although this did not prevent Salvini, whose anti-immigration policies set penalties of up to one million for NGOs that rescued people in the Mediterranean, dedicated all kinds of diatribes to him.