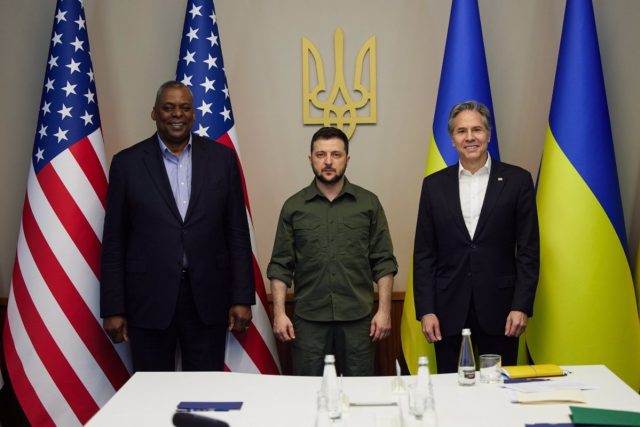 The President of Ukraine, Volodimir Zelenski, together with the US Secretary of State, Antony Blinken, and the Secretary of Defense, Lloyd Austin – -/Ukrainian Presidency/dpa

The Secretary of State of the United States, Antony Blinken, spoke this Saturday with the Ukrainian Foreign Minister, Dimitro Kuleba, to emphasize Washington’s support for the Ukrainian cause in the context of Russian aggression in the country.

Blinken has provided an update on plans for US diplomats to return to Ukraine, including initial visits to Lviv this week and plans to return to kyiv “as soon as possible,” his spokesman, Ned Price, said in a statement. a statement from the State Department.

Read:  At least 19 killed and 27 wounded in bomb attack on Kabul education center

Both have discussed the appeal of the Biden Administration to the United States Congress on April 28 to allocate 33,000 million dollars –more than 31,300 million euros–, in military, economic and humanitarian aid to Ukraine so that it can “win this scandalous Kremlin war.

“It is critical that this funding be approved and as quickly as possible,” Biden said in an appearance in which he insisted that Washington “is helping Ukraine defend itself against Russian aggression,” but that the United States does not plan to send troops to the country.

These conversations take place in the framework of the visit to kyiv last week of the United States Secretaries of State and Defense, Antony Blinken and Lloyd Austin, respectively, who met with the Ukrainian president, Volodimir Zelensky, a meeting in the who promised to return this week to the country.