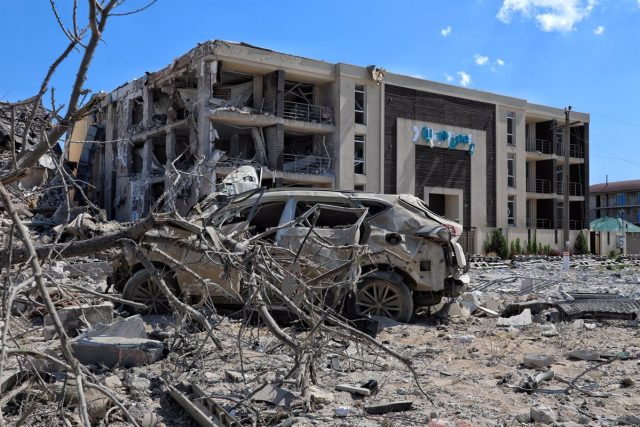 Follow here the latest on Russia’s invasion of Ukraine ordered by Vladimir Putin. This direct is active from May 17, 2022. If you want to see previous news about the war, you can go back to this other direct.

Ukraine has denounced this Tuesday, May 17, that several people have died and “many” have been injured in a missile attack carried out by Russian forces against the town of Desna, located in the Chernigov region (north).

For their part, the Russian authorities have reported an attack with “large-caliber weapons” against a town located in the Kursk region, near the border with Ukraine, and have stressed that the incident has resulted in material damage in a school and several houses, but without victims.

The president of the United States, Joe Biden, has stressed this Thursday that Sweden and Finland meet “all the requirements” to become members of NATO, a gesture that he has personally transferred to the Swedish prime minister, Magdalena Andersson, and to the Finnish president , Sauli Niinisto, who expect “quick” accession despite Turkey’s reservations.

The President of Turkey, Recep Tayyip Erdogan, reiterated this Thursday that Turkey will say “no” to the entry of Sweden and Finland into NATO, again criticizing the alleged collusion of the two Nordic countries with “terrorist organizations” such as the Party of the Kurdistan Workers (PKK) and People’s Protection Units (YPG).

Read:  At least eight miners trapped after coal mine collapse in Mexico
13:46

The British Government has imposed this Thursday a new package of sanctions against three Russian airlines –Aeroflot, Rossiya Arilines and Ural–, which will allow London to freeze the assets of these companies in the midst of the Russian invasion of Ukraine.

The Russian Government has ordered this Thursday the expulsion of five employees of the Portuguese Embassy in retaliation for the measures adopted by the Portuguese authorities against Russian diplomats as a result of the military offensive launched in February in Ukraine.

Scholz rules out “shortcuts” on Ukraine’s path to the EU

German Chancellor Olaf Scholz warned on Thursday that his government will not accept “shortcuts” in Ukraine’s integration into the EU, despite repeated calls by Ukrainian President Volodimir Zelensky to speed up a process that may take time. during years.

Russia closes the correspondent office of the Canadian chain CBC

The spokeswoman for the Russian Foreign Ministry, Maria Zajarova, has reported that she has closed the correspondent office of the Canadian network CBC and has suspended the accreditation of its journalists in the country in response to the measures taken by Ottawa in the framework of the war from Ukraine.

Read:  Biden will meet in Poland with the defense and foreign ministers of Ukraine
13:17

Russia announces its withdrawal from the Council of Baltic Sea States

The Russian government announced on Tuesday that it is withdrawing from the Council of Baltic Sea States, which in March suspended Moscow’s participation in the body in response to the invasion of Ukraine, which began on February 24 by order of Russian President Vladimir Putin.

The Russian government has recognized that there is currently no type of negotiation with the Ukrainian authorities to lower war tensions, according to Moscow due to kyiv’s lack of commitment to a dialogue that has hardly produced practical results.

Russia expels two employees of the Finnish Embassy in Moscow

The Russian Government announced on Tuesday the expulsion of two employees of the Finnish Embassy in Moscow for its sanctions against the country and its “confrontational stance” after the outbreak of the war in Ukraine, “including the delivery of weapons to the regime of Kyiv”.