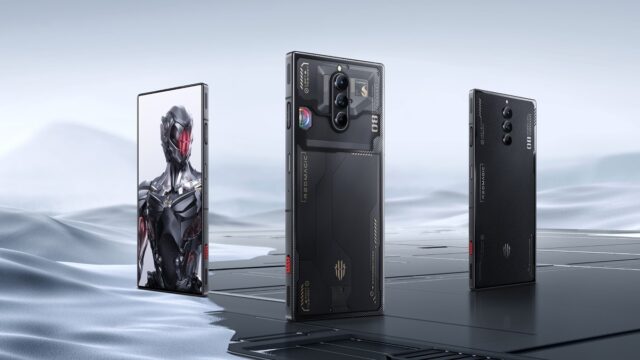 Red Magic, the gaming phone series from Nubia (formerly ZTE brand), is one of the most popular in the gaming smartphone market. Unlike other brands, which have top specs but also prices worthy of the premium phone area, the new Red Magic 8 Pro, launched in December in China, comes to Europe with a slightly more affordable price, probably the most affordable for a Snapdragon 8 Gen 2 equipped phone.

Unlike in China, which received two models, the Red Magic 8 Pro and Pro+, in Europe we’ll only get models with the “Pro” ending, with the caveat that they’re similar to the Chinese ones, but with slightly changed names and hardware. The base variant is called “Matte” because it has a matte textured back and integrates 12GB RAM and 256GB internal storage. The top model, the Red Magic 8 Pro “Void” with transparent back, is the equivalent of the Pro+ and offers 16 GB RAM and 512 GB internal storage. With the move from the China to Europe version, both RedMagic 8 Pro models also get a 6,000 mAh battery with 65W charging. It’s a slight downgrade, considering the Chinese models charge at 80 and 165W respectively. The Pro+ however had a smaller battery at 5,000 mAh, so at least in this respect we see a 20% capacity upgrade for the top variant.

Read:  Dumitru Prunariu is invited to the podcast ALTCEVA with Adrian Artene on the 41st anniversary of his first flight into space

Other features of the two phones are common: 120Hz OLED screens at 2,480 x 1,116 pixels with 6.8″ resolution, 16-megapixel front-facing camera below the screen, touch buttons on the sides for gaming, and the latest mobile technology inside. We’re talking Snapdragon 8 Gen 2, as mentioned at the beginning, cooled with an ICE 11 system, which integrates an active 20,000 RPM cooler that will increase air transfer over previous generations. The phones also integrate stereo speakers, two X-axis vibrators, headphone jacks, and even technologies that have yet to be officially released. The wireless system benefits from Wi-Fi 7 (4x4MIMO) support for when we get routers like this on the market, and the 9 5G antennas will ensure that the signal will be strong no matter where you hold the phone. The only area where some compromises have been made are the cameras on the back: 50 megapixels for the main camera (Samsung GN5 sensor), an 8 megapixel ultra-wide lens module and a 2 megapixel macro camera.

The Red Magic 8 Pro launches in the West on February 2, and prices start at €650 for the Matte variant and €750 for the Void variant. Considering the rest of the perks like headphone jack, gaming optimizations, active cooling and true stereo speakers, the Red Magic 8 Pro is not only the cheapest Snapdragon 8 Gen 2 series to date, but probably the best equipped on the market. That is, unless you need the most advanced camera system, a chapter in which these models are only at the mid-range level. The phone will also be available to order in Romania from the official website. Here is the list of countries receiving Red Magic 8 Pro:

Transport masks : Simón anticipates the end of masks in transport...

TikTok accused of offering a “secret” option for counter-cost promotion to...