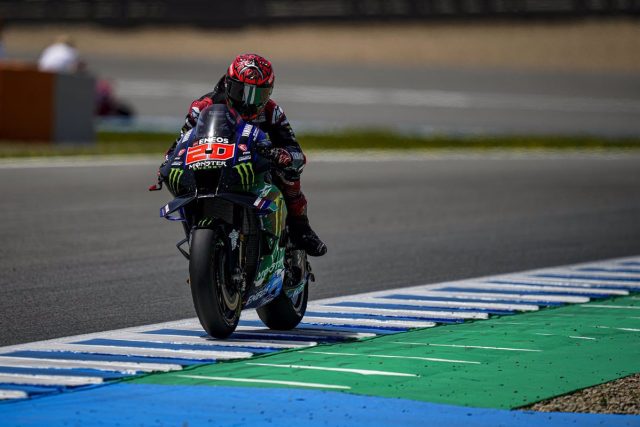 The French rider Fabio Quartararo (Yamaha) will try to take advantage of the warmth of his fans to open the first important gap in the Motorcycle World Championship, which lands this weekend at the Le Mans circuit, the scene of a French Grand Prix where the Spanish Aleix Espargaró (Aprilia) will try to confirm his candidacy in MotoGP and Sergio García Dols (GasGas) will further strengthen his leadership in Moto3.

It seems that the arrival of the championship in Europe has clarified the panorama in the ‘queen’ category a little more, mainly for the current champion who, despite his initial problems with his motorcycle, has shown himself to be the most regular in these first two dates continents and has managed to take command.

The man from Nice arrives in his country after chaining a valuable victory in Portimao (Portugal) and a second place in Jerez de la Frontera (Cádiz), two consecutive podiums in a year in which it is not being easy to be in the box regularly and that now make him the rival to beat.

In fact, only two riders have climbed to the top three times: the ‘Diablo’, who also did it with a second place in Indonesia, and the Spaniard Aleix Espargaró, winner in Argentina and who has just made two third places in the two last Grands Prix to be its main rival. Alex Rins (Suzuki), the Italian Enea Bastianini (Ducati), the only one capable of winning two races, and the Frenchman Johan Zarco (Ducati), are the others who have done it more than once.

The MotoGP World Championship is still tight, with Quartararo leading with 89 points, just seven ahead of the surprising Aleix Espargaró, but the distance from then on begins to widen with Bastianini and Rins at 20 points. For this reason, the current champion will try to shine against his countrymen and give the first serious blow in a championship that in Le Mans will fulfill the first third of it.

Read:  Marc Márquez: "I didn't feel the way I wanted, it's not where we want to be"

In any case, Quartararo only has one podium in his World Cup career in France, a third place in 2021, and Yamaha has not won on this track since Maverick Viñales did it in 2017, although the streak of a local rider is worse. No Frenchman has achieved it on the stage of the prestigious 24 Hours and you have to go back to the 1950s to see one win in 500cc (Pierre Monneret, in 1954 at Reims, and Jacques Collot, in 1958 at Pau).

Aprilia has never won on this circuit, but comes very hopeful due to the great performance of Aleix Espargaró, who has only ‘failed’ in Mandalika and Austin, wants to ratify if his candidacy for the title is serious, while Alex Rins, in In the midst of the commotion caused by the possible departure of Suzuki from the World Cup after this year, he will try to recover the ‘0’ of Jerez, like his teammate Joan Mir, the champion in 2020 who has given up a lot of ground and must start to come back.

It is Ducati that has dominated this Grand Prix for the last two years thanks to the wins of Australian Jack Miller and Italian Danilo Petrucci, raising hopes at the Borgo Panigale factory to rejoin the title fight with Francesco Bagnaia. The Italian gave the Italian brand in Jerez the third victory of the season to be the fifth different winner and confirm his improvement after a difficult start to the campaign, although he is still far from the top, 33 points.

For his part, the eight-time world champion, the Spaniard Marc Márquez (Repsol Honda), also has a long accumulated disadvantage and is almost two races (45 points) behind Quartararo. In a campaign still without podiums to his credit, the man from Cervera, triple winner at Le Mans (2019, 2018 and 2014), will try to be more competitive and fight with those in front. His partner Pol Espargaró will also seek to return to at least a ‘Top 10’ in which he has only been in Lusail (Qatar, third) and Portimao (ninth).

In addition, the grid will encounter the always problematic weather in the area, with rain forecast for both Saturday and Sunday, so the number of candidates for the podium can be considerably increased.

On the other hand, in the other two categories, the two leaders arrive at this French Grand Prix with a little more clearance compared to their rivals, especially the Spaniard Sergio García Dols, who leads the Moto3 general classification.

The rider from Castellón is demonstrating his candidacy to fight for the title in a year where he is the best of the participants with four podiums and fourth place in six races to dominate with 103 points, the most in the entire World Championship.

García Dols is excited because he arrives at a track that he conquered in 2021 and for being second in the Jerez-Ángel Nieto, where he was surpassed precisely by his teammate, the also Spanish Izán Guevara, third classified in the championship with 30 points. Between the two Aspar Team drivers, the current world runner-up, the Italian Dennis Foggia (Honda), who is 21 points behind the leader after two bad first races in Europe with only eight points added.

Finally, the Moto2 category is the only one that keeps the rider who took the lead in the Qatar Grand Prix in the lead. The Italian Celestino Vietti (Kalex) despite not being in contention for the podium at the Spanish Grand Prix adds 100 points and is 19 ahead of the Japanese Ai Ogura (Kalex), winner in Jerez.

On the Cadiz track, the Valencian Aron Canet (Kalex), despite running recently under surgery due to a wrist injury, shone with a second place that made him recover part of his options in the championship, although he is still 31 points behind in fourth place, behind the Italian Tony Arbolino (Kalex), who completed the last podium.