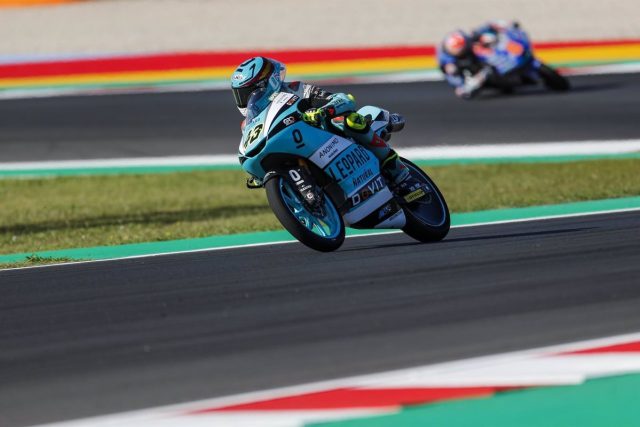 The rider Xavi Artigas (Honda) has claimed the last victory of the year in Moto3 at the Comunitat Valenciana Grand Prix, leading an entirely Spanish podium together with Sergio García Dols (Gas Gas), who confirmed his third position overall in the World Championship, and Jaume Masià (KTM), who came back to the podium from the twenty-third starting position, while the champion Pedro Acosta (KTM) went down due to a contact with Dennis Foggia (Honda) on the last lap.

In this way, the Barcelona ‘rookie’ becomes the seventh different winner of the course and closes a tough 2021 in the best way. Meanwhile, García Dols, absent from several races in the final stretch of the championship due to a kidney injury, was able to retain his third place in the final classification of the small engine.

Read:  Mir: "We have to continue with the good evolution that we had until Portimao"

With the man from Mazarrón debuting in the race his status as world champion achieved in the Algarve, a fall in the middle of the peloton of the Frenchman Lorenzo Fellon (Honda) and the South African Darryn Binder (Honda) was about to cause greater harm before the arrival of the Japanese Ryusei Yamanaka (KTM), who went to the ground to avoid going over the African.

Meanwhile, Acosta managed to retain his privileged position, after the Japanese Tatsuki Suzuki (Honda) snatched it from him for a short time. The Murcian began to push and Izan Guevara (Gas Gas) came off his wheel, although a front group soon formed that rode together for much of the race.

Riders such as the Turkish Deniz Öncü (KTM), who rose to the lead with 14 laps to go, and Jaume Masià (KTM) joined the fight, and Xavi Artigas (Honda) managed to displace the Ottoman from the top only three laps after they take command.

Öncü briefly regained first place, and Masià and Acosta settled in the lead followed by Sergio García Dols (Gas Gas) who also joined the exchange of passes that starred in the last laps at the Ricardo Tormo Circuit in Cheste.

In the final fight, the Leopard Racing of Italian Dennis Foggia (Honda) and Artigas teamed up to frustrate the victory of Acosta, who was left out of the race after touching on the last lap with the world runner-up -who was sanctioned with three seconds for the maneuver. Artigas, after a one-on-one with García Dols, managed to be crowned.

Among the rest of the Spanish, Guevara finished seventh, ahead of Carlos Tatay (KTM), Jeremy Alcoba (Honda) finished fourteenth and Adrián Fernández (Husqvarna), fifteenth. For his part, José Antonio Rueda (Honda), like Acosta, was unable to finish the race.