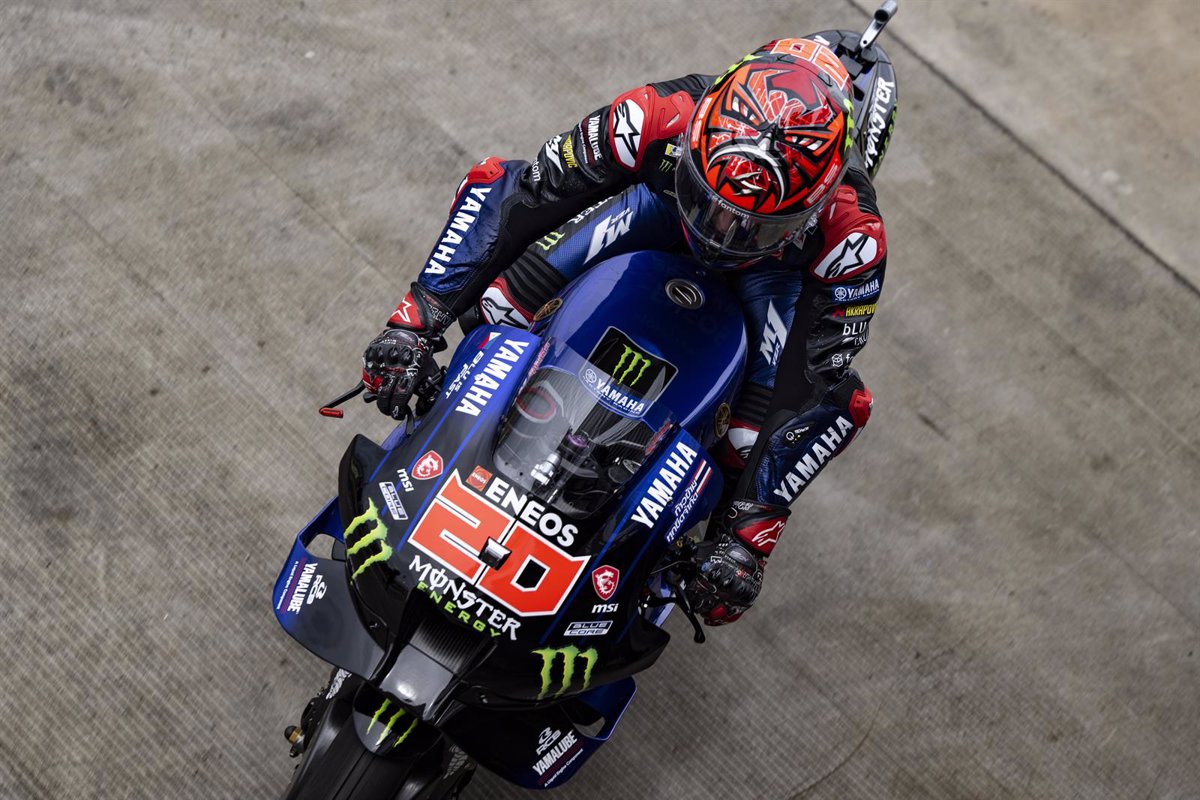 The French rider Fabio Quartararo (Yamaha), in MotoGP; the British Jake Dixon (Kalex), in Moto2; and the Spaniard Carlos Tatay (CFMoto), in Moto3, have conquered the pole positions in their respective categories this Saturday for the Indonesian Grand Prix races, the second round of the Motorcycle World Championship, on a day in which the Spaniard Marc Márquez (Repsol Honda) crashed twice and did not go through to Q2.

In Mandalika, ‘El Diablo’ has left behind the problems of the Yamaha in the Qatar desert to win a first starting position for the first time since the 2021 Catalunya Grand Prix, overcoming the dominance of the Ducati in the first stage of the second qualifying round.

In fact, it will be two Borgo Panigale bikes -which sneaked five into the ‘Top 10’- that will accompany him on the front row of the grid, those of Jorge Martín and another Frenchman, Johann Zarco. The one from San Sebastián de los Reyes was the best classified Spaniard in a Q2 in which Àlex Rins (Suzuki) was eighth after overcoming the scare in FP4, when he was forced to jump out of his burning GSX-RR. Meanwhile, Aleix Espargaró (Aprilia) closed the ‘Top 10’.

For its part, Honda again showed the difficulties it is having on the Indonesian track and none of its bikes managed to advance from Q1. Marc Márquez (Repsol Honda) insisted on making the cut, but suffered two crashes at turns 13 and 12 that condemned him to fifteenth starting position, just ahead of his teammate Pol Espargaró.

AUGUSTO FERNÁNDEZ STAYS ONE TENTH AWAY FROM DIXON’S POLE

In Moto2, the British Jake Dixon (Kalex) had the honor of taking the first pole of the intermediate category at the Mandalika International Circuit, and will lead a first row in which he will be accompanied by the Spanish Augusto Fernández (Kalex), who stayed one tenth of his time of 1:35.799, and his compatriot Sam Lowes (Kalex).

In a day with quite a few crashes, Albert Arenas (Kalex) made a leap in quality to classify sixth, while the reigning Moto3 world champion, Pedro Acosta (Kalex), will start tenth and lead a fourth row in which Fermin will also be Aldeguer (Boscoscuro), twelfth.

The Murcian, however, will have to complete a ‘Long Lap’ during the race after having suffered a fall while the yellow flags were waving during FP2.

Read:  Bagnaia beats Quartararo with a record pole in Jerez

In addition, Arón Canet (Kalex), second in Qatar, will start thirteenth, ahead of Marcos Ramírez (MV Augusta) and Jeremy Alcoba (Kalex), with Manu González (Kalex) and Jorge Navarro (Kalex) seventeenth and eighteenth, respectively, despite not shooting in Q2.

For his part, Carlos Tatay (CFMoto) conquered the first pole of his career in the World Championship, escorted by two ‘rookies’, the Brazilian Diogo Moreira (KTM) and the local Mario Aji (Honda), who unleashed madness among his countrymen in Mandalika.

The Valencian, champion of the Red Bull MotoGP Rookies Cup 2019, dominated a session in which his teammate Xavi Artigas (CFMoto) was left at the gates of the front row after having passed through Q1. He also had to participate in the first qualifying round -including a crash- Sergio García Dols (GasGas), second in Losail and who will now start seventh ahead of his garage colleague Izan Guevara (GasGas).