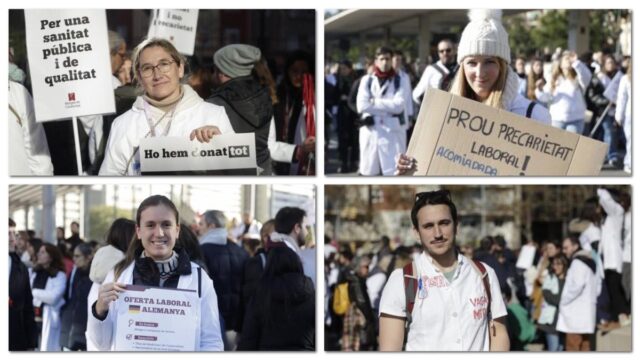 The workers of the public health of Catalonia have taken to the streets again this Wednesday to defend the main pillar of the Welfare State. This is the second major strike in the last four years in the territory (in 2018 there was one but only of primary care, while in this one the hospitals have also participated), and it will continue, at least, until tomorrow, Thursday.

These are the faces of some of those who took part in the first of the two-day strike.

Rocío Sánchez: “Doctors and nurses have the same problems”.

“We are here to support quality public health care.” she states emphatically Rocio Sanchez, nurse at the CAP Sarrià, in Barcelona. Sánchez participates in the demonstration of Metges de Catalunya (MC), the main medical union, in which she also participates. there are more nurses. While she is mobilizing at the headquarters of the Conselleria de Salut, in Les Corts, at the other end of the city, in Sant Jaume square, another one is taking place. Demonstration of teachers and other health profiles. who are not doctors (and who are convened, the latter, by minority unions).

Sanchez regrets this separation. “We do separate ‘manis,’ but with the same objective. We are all healthcare workers and we all have the same problems,” says this nurse, who is harshly against the bureaucracy that grips primary care and which takes up to 40% of a doctor’s or nurse’s workday. “We have studied hard to do a job on a one-on-one basis and Without so much computer.” Sanchez criticizes. He acknowledges that more and more patients “complain” and that healthcare workers no longer have the “recognition” they received during the pandemic. “And the youth are going out to work.” concludes.

Marina Gual: “I was fired while pregnant”.

The case of Marina Gual, a doctor at the CAP Sant Martí, illustrates the precariousness of the Institut Català de la Salut (ICS). It happened in May last year. “I was On sick leave for occupational hazards, because she is pregnant, and they told me that my position had been cancelled because I was an interim,” says this woman from the heart of the demonstration. “I was four months without a contract.”

That’s why this Wednesday she has decided to strike and demonstrate, while pushing her son’s car. “I’m here so that we have decent contracts. We are not a number,” he says. Gual says she enjoys her work, but that the conditions If we’re not well ourselves, we can’t take care of others. There’s a lot of ‘burnout’ in the medical profession.” he ditches.

Roser Termes: “They use MIRs as labor because there are no specialists”.

She holds in her hands a piece of paper that shows how much a doctor charges in Germany: 7,000 euros per month, guards apart. Roser Termes, 29, is an interim resident physician (MIR) in surgery at Hospital Clínic. “I am here to improve the quality of our work and the resident training.” explains.

Read:  Demonstrated the existence of stem cells in the human brain

This young woman denounces that the system uses the residents as “labor”. “We work long, long hours for fill gaps of attending physicians, specialist positions that are not filled because there is a lack of personnel,” he explains. He acknowledges that those from abroad are “attractive” salaries, but he rules out leaving because of his family.

Martí Quintana: “We are here for a more dignified future”.

Martí Quintana has come from Girona to demonstrate in Barcelona. He is MIR internist at the Hospital Doctor Trueta. “We claim dignity, we are here For a more dignified future.” he affirms. “For the future that is us and the present of those who are to be formed now,” he says combatively.

Quintana denounces that the MIR are not guaranteed their “training”. Who are “exploited”. That working and training hours are “not regulated”. An example is the consultations: “We have a high volume of patients. The other day we had as many as 38 patients in just one morning in our practices,” he says. “And there is no estimate on our workload either.”