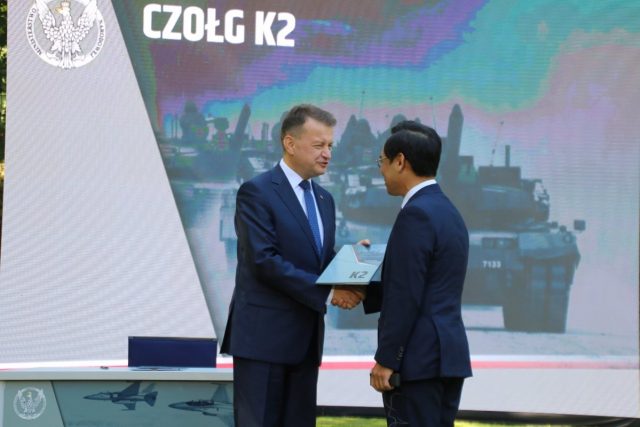 Polish Defense Minister Mariusz Blaszczak signed on Wednesday an agreement with Hyundai Rotem Co. president and CEO Lee Yong Bae for the purchase of fighters, tanks and howitzers from South Korea in a decision aimed at strengthening the capabilities of the Polish Armed Forces.

Poland will acquire 48 ‘FA-50’ model fighter jets, 980 South Korean-made ‘K2 Black Panther’ model battle tanks and 648 K-9 howitzers, the Polish government has said, describing the deal as one of the country’s largest and most important defense orders in recent years, as reported by Yonhap news agency.

Warsaw is engaged in a campaign to strengthen its arms capabilities in order to counter a hypothetical threat from Russia and replenish the weapons it has sent to Ukraine.

The delivery of 180 K-2 tanks is estimated to begin this year, and another 800 tanks of this model will be manufactured in Poland. Also, the European country plans to purchase first 48 K-9 howitzers and later 600 additional ones.

Previously, Poland had already announced that, of the 48 ‘FA-50’ combat aircraft it plans to purchase, a first batch of 12 aircraft will be delivered in the middle of next year.

During the meeting to sign the agreement held at the Ministry of Defense in Warsaw, Blaszczak has stressed that South Korean weapon systems are the most suitable to meet his country’s defense needs, taking into account several aspects such as technology, costs and deployment time.