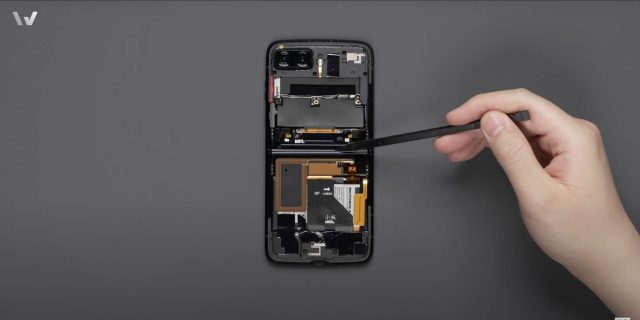 The Moto Razr 2022 was recently announced in China, and in the near future, Motorla’s new foldable phone will arrive in Europe. The third foldable model in the series, however, comes with significant changes, both in terms of exterior design and the way it’s built. It seems that Motorola has mainly taken inspiration from rival Samsung for the new Razr.

While for the first two models, the phone had a foldable screen that also slid a bit when folded and unfolded, now the company uses a system that involves more moving components. The only moving thing in the Razr 2022 is the new hinge, which is not only the only point on the screen where folding occurs, but is also one that can be opened in multiple positions. The original Razr only had two positions: folded and unfolded.

How the new hinge works is highlighted by the first video of the Moto Razr 2022 disassembly. WekiHome, a YouTuber from China, already has possession of the phone and has taken it completely apart to see how it was built. Because interior space is very limited, pretty much all the internal components are stacked, with a sandwich-like base plate, as we see on other recent flagships.

Battery has received a significant upgrade

The battery, as expected for a foldable phone, is split into two but not equal parts. At the bottom of the phone is a 2,788 mAh battery, while at the top is an integrated 712 mAh cell, in total the phone offers 3,500 mAh, more than previous Razr models, but less than the new Galaxy Z Flip4, with a 3,700 mAh battery.

Cooling the Snapdragon 8+ Gen 1 processor is also important, and Motorola has integrated more copper elements to help dissipate heat in use.

Now that we know pretty much everything that’s important about this model, we’re also waiting for information about the phone’s availability in Europe, as well as pricing information, as the announced prices for China are not relevant for other regions due to extra import duties from China, as well as adding shipping costs.