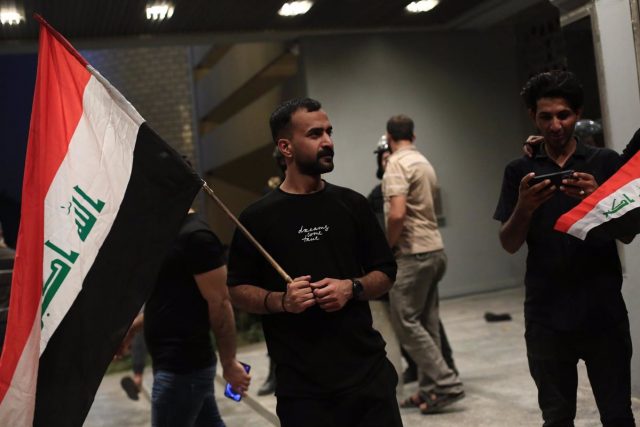 Demonstrators retake Parliament, where they announce a sit-in, and encircle the headquarters of the Supreme Judicial Council

At least 125 injured, eight seriously, in clashes in the capital between thousands of cleric’s supporters and security forces

Thousands of supporters of the cleric Muqtada al Sadr, strongman of Iraq, have retaken for the second time this week the Iraqi Parliament in the capital, Baghdad, during a new mass protest against the candidacy of the Shiite politician Mohamed Shia al Sudani, pro-Iranian against the religious, as prime minister of the country, and which so far has already resulted in 125 wounded as a result of the ensuing clashes with security forces.

The raid on the Parliament, confirmed by sources of Sky News Arabia and the Rudaw agency, took place hours after the beginning of the rallies in the Green Zone of Baghdad, one of the most protected sectors of the capital, which houses most of the international embassies and institutional headquarters of the Iraqi government, including the Legislative itself.

“The demonstrators have passed the front-line concrete barriers that the Iraqi security forces have placed on the Al Jumhuriya bridge, in an attempt to reach the Green Zone,” Shafaq Agency sources began to indicate early in the morning.

At the moment, and according to the official news agency INA, the demonstrators inside the Parliament have declared a sit-in of indefinite character while another group is already surrounding the headquarters of the Supreme Judicial Council as well as the Supreme Federal Court of the country, protected by a security detachment.

The first balance sheet of the Iraqi Ministry of Health, collected by INA, puts the number of injured at 125, eight of them seriously, due to clashes between demonstrators and security forces, who are firing tear gas against the rallies. The Ministry confirmed the full deployment of health personnel in the capital to care for and treat the injured Iraqi demonstrators.

According to the same sources, the capital right now is almost paralyzed, in addition to Al Jumhuriya, Al Sanak, Al Ahrar and Al Shohada bridges are closed, and traffic on the main roads and squares in much of the city “is totally or partially blocked.”

Witnesses from the Al Arabiya network and Rudaw have confirmed that a crowd of the cleric’s followers are also heading to Tahrir Square amid shouts against the Framework of Coordination coalition, a collection of Shiite parties sympathetic to Iran, major defeats in last year’s legislative elections, in which the Sayirun alliance won.

According to Sky News Arabia, the Iraqi government has already ordered the deployment of special police units in various parts of the country to reinforce the regular forces.

For his part, Iraqi Prime Minister Mostafa al-Kazemi, in his first reaction to the new protests, has demanded that the demonstrators “adhere to the peaceful nature of the march and avoid any escalation of violence.”

“The escalation of protests only increases tension and does not serve public interests,” Al Kazemi said in a statement carried by the official INA news agency, in which he warned that “security forces have the duty to protect official institutions” and are able to “take all legal measures to maintain order.”

The cleric has not yet pronounced himself on these incidents, but one of his advisors, Mohamed Salé, has done so, denouncing on behalf of the cleric, as on so many other occasions, the corruption prevailing in the country.

“The political forces are responsible for any violence against the demonstrators,” Salé, also known as “Al Sadr’s minister,” has made known on his Twitter account. “It is you,” he has denounced the political class, “who have stolen Iraqi money, so stop raping the blood of innocents.”

Al Sudani, former Minister of Labor and Social Affairs, was presented as a candidate for prime minister as a supposed consensus choice in order, according to experts consulted by ‘The Arab Weekly’, not to infuriate the cleric, whose greatest rival, former Prime Minister Nuri al Maliki, is precisely the most prominent figure in the Coordination Framework.

The pro-Iranian group decided to take a step forward in the maneuvers to form a government, stuck for months, after last month the 73 deputies of Al Sadr’s coalition, have submitted their resignation en bloc as members of the Iraqi Parliament, jaded by the inability to make progress in the negotiations.

It should be recalled that the political system is designed Iraqi around a shared power between Sunnis, Shiites and Kurds, but in reality it is constantly undermined by factional haggling, corruption and internal discord, from which the Coordination Framework itself does not escape either, the scene of fierce internal disputes before finally electing Al Sudani as candidate, again according to ‘The Arab Weekly’.

Two weeks ago, Al Sadr, also Shiite and once linked to Iran, but now self-declared as a defender of Iraqi nationalism, dealt a blow on the table after summoning hundreds of thousands of supporters for an evening prayer in the streets of Baghdad, where he claimed to be the first political force in the country and demanded the resumption of the talks.

Iraq is already going through its longest period of government negotiations since the first elections held in 2005 under U.S. auspices; a situation that has driven both the country’s population and political class into a state of permanent frustration and prevented OPEC’s second largest oil producer from extracting the corresponding benefits from rising crude prices.

“We are going from crisis to crisis,” a senior Iraqi government official lamented to Shafaq, “with no clear end in sight to end this stalemate.”