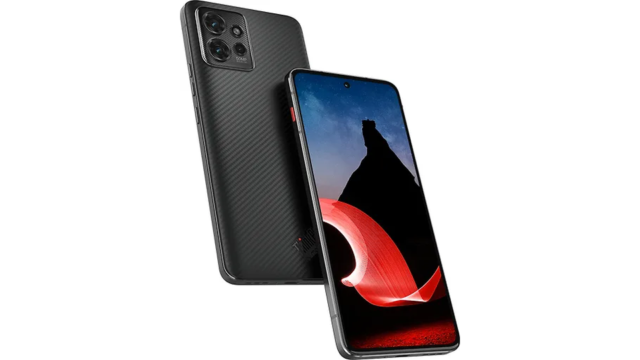 The Motorola ThinkPhone was unveiled at CES as a business smartphone for companies already using Lenovo’s ThinkPad laptops. However, it seems that this model will not be sold everywhere only on a business-to-business basis, but will be available in certain regions and in specialty stores. It seems that at least in some countries in Europe, we will find the phone on the shelf at a “premium” price.

ThinkPhone will hit stores at a premium price

As expected, the Motorola ThinkPhone is not a cheap product. It’s made of quality materials such as carbon fiber and offers resistance to water and even extreme usage situations, according to MIL-STD-810. However, the phone has last year’s flagship hardware, being powered by the Snapdragon 8+ Gen 1, not the new 8 Gen 2. The phone also comes in a single configuration, with 8GB RAM and 256GB internal storage.

According to Roland Quandt at WinFuture, Motorola will offer this phone on-shelf for €999 in select EU countries. Unfortunately, we don’t have a confirmation of which countries the phone will be available in stores. Most likely though, not many people will want to buy this phone compared to other Motorola models, and most users who will get their hands on this model will do so through the company they work for.

Motorola/Lenovo will happily sell you a ThinkPhone as a non-business customer in certain countries, which will set you back 999 Euros. (8/256GB) available from the end of January at some electronics retailers. Was only going to be available as part of corp service contracts. pic.twitter.com/jGCF72YN5U

That’s because ThinkPad laptops aren’t very common among mainstream users, they’re mostly sold to businesses. And ThinkPhone’s special software features that allow you to connect to a Lenovo laptop like this are a big part of the benefits it offers.

Read:  Samsung 990 Pro will be Samsung's first PCIe 5.0-compatible SSD with speeds of over 10GB/s

Of course, there will be a few who want a “different” phone, and the ThinkPhone certainly ticks that category. It has a unique design, is made of materials we don’t usually see on smartphones, and is among the few “business” phones on the market. In the past, this segment was occupied by BlackBerry and Nokia’s Communicator models, but since their demise, this device category has pretty much disappeared, replaced by the traditional smartphone.