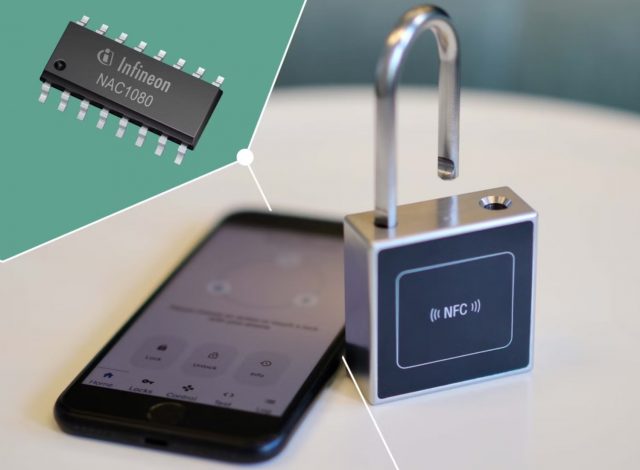 New hardware makes possible mechanically actuated devices, such as smart padlocks and switches, that don’t need their own power supply.

Smart locks are a very tempting innovation, until their batteries fail and you find yourself unable to access the target unless you resort to extreme means that involve destroying the equipment. The problem is actually much bigger, with hotels and institutions using locks that require regular maintenance, without which access to the room or the safe you’ve just stored your belongings in becomes mere boxes. Most of the time, the problem can be solved by inserting a mechanical key in a relatively hidden location. But not every time.

In addition, the need for a fully mechanical unlocking system adds complexity and substantially increases the cost of that lock. So why wouldn’t you want to get rid of this problem completely by developing a lock that can be powered from external sources. Ideally, using an already existing and widely deployed technology.

Read:  In the mother country of Samsung and LG all citizens will turn 1 year younger next summer

And that technology is NFC, an innovation originally developed with only powering access cards in mind, simple microchip devices with no moving parts. But as NFC technology has become so pervasive that it equips most smartphone devices, the chances of a superior alternative replacing it in the near future tend towards zero, with the remaining alternative being to adapt new generations of devices to overcome NFC’s limitations. And the biggest limitation is the very low power current allocated to these devices. Once activated, the chipset powered by an ultra-efficient ARM Cortex M0 family processor retains enough energy to operate a mechanical lock, such as a padlock mechanism. All without additional power or other complications that add to the size and cost of the device.

Focused on security and use in smart locks, the chip developed by Infineon supports encrypted digital keys using the AES 128 bit standard and includes its own random number generator, opening up options for using disposable access keys. The manufacturer recommends the new product for all sorts of applications, from hotel room access devices, furniture locks, mailboxes, to portable padlocks for use in securing bicycles and locking gates that are not necessarily compatible with smart technologies.