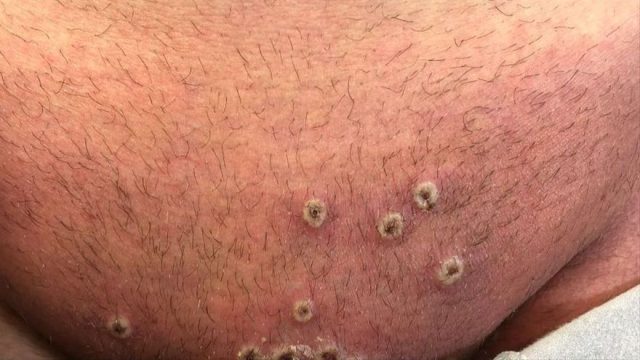 Monkeypox worries doctors. The Head of Dermatology Service of Madrid’s Hospital Universitario 12 de Octubre, the professor, paul Luis Ortiz-Romero has warned today about the consequences of this disease, of which eight cases have been detected in the community, affects the skin. “It’s scary. Very scary.“, says the doctor of the large public health center on Twitter. The specialist has reported that, during this morning, have seen three casespending microbiological confirmation, in the hospital.

In a message published on the social network, Dr. Ortiz Romero illustrates the serious injuries caused by monkeypox, which is a disease endemic to the African continent, where various mammals can transmit it to humans. Causes skin rashes. According to the World Health Organization (WHO), it causes a lethality from 1% to 10%, especially among the child population.

Three cases of #Monkeypox on a morning in @dermah12o !!! (We still do not have microbiological confirmation)
It’s scary. Very afraid pic.twitter.com/1qmLmXPNge

This very morning the Ministry of Health of Madrid has reported that the General Directorate of Public Health has detected eight possible cases of monkeypox or monkeypox, which are currently being studied in coordination with the National Center for Microbiology, which has the necessary technique to confirm or rule out the diagnosis.

Read:  Study estimates direct costs of mental illness to be 30% higher by 2025

Monkeypox presents with fever, myalgias, inguinal lymphadenopathy (swollen glands), and a rash on the hands and face.

Three of them, according to the information provided by the professor of Dermatology on Twitter, have been seen on October 12, information that confirms that this medium, from the hospital itself, although they specify that, as the doctor says, they are pending confirmation for microbiology. Health of Madrid It has not detailed in which other health centers in the region the other five cases that have been detected would be found.

Monkeypox, indicate from the Ministry of Health, is a very rare disease, which generally presents with fever, myalgia, inguinal lymphadenopathy (swollen glands), and a rash on the hands and face, similar to that of chickenpox. In general, they specify, the transmission of the monkeypox it is respiratory, but due to the characteristics of the eight suspected cases, the transmission points to being by contact with fluids. The eight suspected cases in Madrid They are men who have relationships with men.they need. They evolve wellbut this disease, they warn, may require hospital admission.

On the other hand, the researcher from the Higher Council for Scientific Research of Spain (CSIC) Margaret of the Valley has stressed in this regard that it is necessary “Locate the source of the transmission and stop it as soon as possible”. In this regard, the virologist explained that this disease is caused by a virus that is transmitted by rodents — the name is “wrong,” she pointed out — and that it generates “very large and showy on the skin like smallpox“.

Read:  Monkeypox: What is the ring vaccination strategy

The alert comes after Portugal confirmed three cases, has another two pending confirmation and another 15 under investigation.

Thus, “for quite some time there has been rare cases in peoplenormally young, who tkept rats as pets” in other countries, although now it seems that it can be transmitted sexually, which “is a problem because it is more difficult to detect”.

The Ministry of Health has launched a health alert to all the autonomous communities after detecting eight suspected cases of monkeypox in Madrid. The alert, launched this Tuesday afternoon, comes after Portugal confirmed three cases, has another two pending confirmation and another 15 under investigation. Two days before, the the United Kingdom had reported the existence of an outbreak with seven infected.