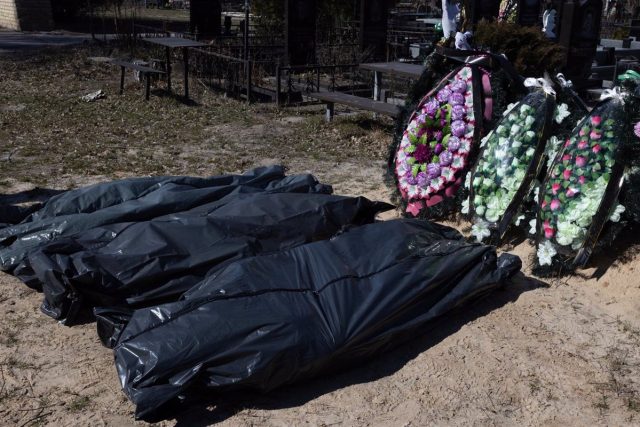 The mayor puts the number of war crimes committed by Russia in the city at 1,256

The authorities of the city of Mariúpol have accused Russia of burying in mass graves, without death certificate, those who fell under its attacks, a “mockery”, they have said, with which they try to hide their “crimes”.

This has been told by the adviser to the Mariúpol Mayor’s Office, Petro Andriushchenko, through his Telegram channel, who has described this situation as the “umpteenth mockery of the Russian occupiers.”

“The occupants provide a death certificate and the right to be buried in a separate grave and coffin only in case of death from natural causes,” Andriushchenko said.

“In case of death under fire, or even as a result of injuries, no death certificate is issued and the person is buried, nameless, in a common grave. At most they issue a certificate of “disappeared” to the next of kin” , has explained.

“This does not even cover up their crimes. This is something else,” said the advisor to the Mayor’s Office of this city, currently devastated by the fighting and with some 150,000 people trapped without access to basic supplies.

For his part, the mayor of Mariupol, Vadim Boichenko, has put the number of war crimes committed by Russian forces in the city at 1,256. “All this is already being investigated by the Regional and General prosecutors,” he said.

“We have recorded all the crimes committed by the Russian Army and the self-proclaimed leaders who have declared themselves in power. There are many crimes in Mariupol. There are 1,256 (…) there are indications of war crimes,” Boichenko said, recalling the episode. of the Mariúpol theater, bombed on March 16.

“There are witnesses who have already stated that there were more than 300 people in the Drama Theater,” Boichenko said. The exact number of victims is unknown at this time. After the removal of the rubble was completed on May 20, adviser Andriushchenko assured that many of the dead were buried in a mass grave in Manhush, in Donetsk.

This week, Boichenko reported that new mass graves had been found in the city and put the number of fatalities left by Russian forces at 22,000, although he clarified that these figures were likely to increase “significantly.”

Mariúpol is one of the main spaces of this war started three months ago by the Russian president, Vladimir Putin. This port city on the shores of the Azov Sea has been practically destroyed due to the bombing after the siege to which it has been subjected by the Kremlin forces.

This is a fundamental scenario for the future of the war and future peace negotiations, with regard to the geostrategic and commercial interests of both countries, with Russia intending to close Ukraine’s outlet to the sea and unite the Donbas region. with the Crimean peninsula, both under its umbrella.