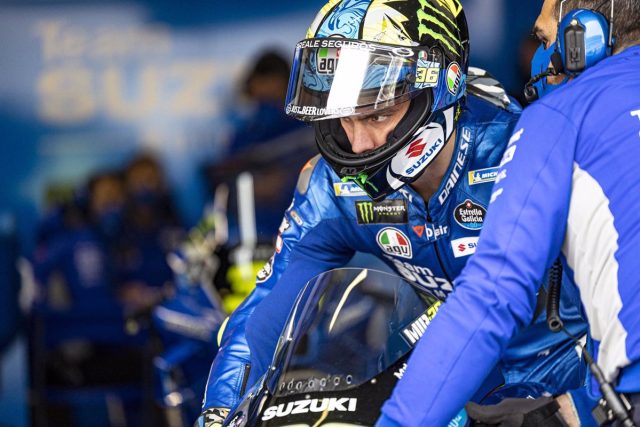 The Spanish rider Joan Mir (Suzuki) has assured that he will go out “to give everything” this weekend at the Spanish Grand Prix, in which he will try to “continue with that good evolution” that he had until the Portimao race, where a fall ruined his options.

“I’m just going to go out there and give it my all like I did in Portimao from the first practice session, to try to draw good conclusions with the bike and see if I can fight for victory. We have to continue with that good evolution that we had until the race in Portimao, We have to try to have a good weekend here even though it is not my favorite circuit, but it is a circuit with an opportunity to be fast”, he told Estrella Galicia 0,0, a brand for which he is an ambassador.

Read:  Pol Espargaró: "In Qatar it's about building a good base"

In the Portuguese Grand Prix, the Spaniard went to the ground due to a race set with the Australian Jack Miller (Ducati). “It’s difficult to assimilate, when you go out to win, that it’s ruined by a crash. Although, I was probably more angry for not having had a good feeling with the bike, which hadn’t been like that throughout the weekend, than simply because of the fall with Jack -Miller-“, recognized.

“The feeling has not completely gone away, and I hope it will go away when I go out to race here, in Jerez. The good news is that we are having two race weekends in a row and we have the opportunity to get rid of that thorn stuck” , he continued.

On the other hand, the 2020 MotoGP world champion was happy that the Spanish Grand Prix can once again host spectators. “I remember racing in Jerez without an audience and it has nothing to do with racing when the stands are full. When you arrive at the circuit and start seeing people and it’s Wednesday, it means it’s going to be a special weekend,” he stressed. .

Finally, Mir assured that he is not thinking about his renewal and that he is concentrating on competing. “Each one has an idea of ​​what he wants to do and then delegates to the manager to do what comes out of the pilot. Right now I’m in that situation,” he concluded.