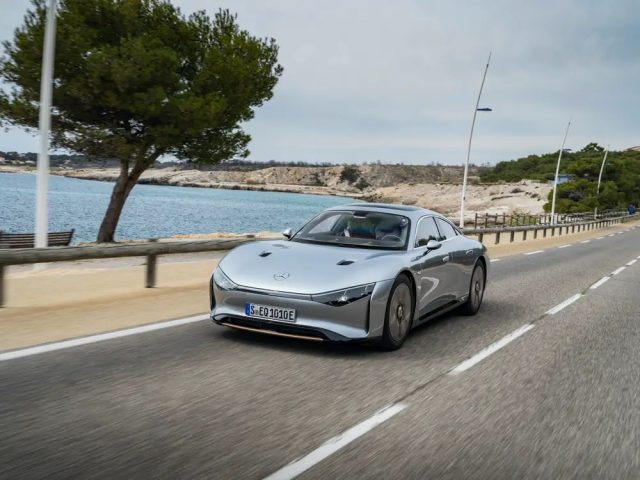 Announced earlier this year, the Mercedes Vision EQXX concept design EV has unequivocally demonstrated its capabilities, becoming the first electric car with a proven range of over 1000 km, tested in real traffic conditions and using the most diverse routes.

Vision EQXX comes with a bold design, as is characteristic of concept cars, but this is just the elegant packaging for a number of very promising technologies, developed by Mercedes.

Even if the aerodynamic shape is one of its strengths, this cannot be the explanation for the autonomy at least twice as much as in the competition models. For example, the Tesla Model S in long-range equipment, an EV with a price of $ 100,000 and identical battery capacity (100kWhr) offers only 523 km of autonomy, and this in the list of specifications. Another rival, the $ 170,000 Lucid Air model, offers a range of 836 km, but from a 118kWhr battery that adds significantly to the final cost.

Read:  Apple will repair the screens of some Apple Watch models for free

According to the German manufacturer, Vision EQXX is the vision for the future of electric cars.

A first advantage for the EQXX is the redesigned battery, 30% smaller and lighter than other EVs of similar capacity. With a more compact and lighter design, energy efficiency increases noticeably.

The car weighs only 1,750 kg, slightly to the standards of an electric car with such battery capacity installed. Another aspect supported by Mercedes is the optimization of the propulsion-running assembly, the technology of the car sending 95% of the energy extracted from the battery directly to the wheels. For comparison, the efficiency of a car with thermal propulsion is 20-35%, in the happiest situations.

Mercedes recently said that the Vision EQXX reaches a consumption of 10 km per kWh, compared to other cars today. However, the practical tests exceeded even this estimate, revealing a consumption of 11.42 km for every 1 kWhr extracted from the battery. The car also has a “solar roof” consisting of photovoltaic cells that would have added a little over 25 km to the final measured range.

Read:  Play Store apps now have an information section where you can find out how much you're watching

Inside, the car is equipped with a 47.5 ”continuous screen, which occupies the entire front of the dashboard, and the car uses a lot of recycled and sustainable materials in its construction. They extend to the outside, where the wheels are made of magnesium, and the brake discs are made of aluminum alloy.

The bad news is that the Vision EQXX is just a technological demonstration with no budget limit from Mercedes, the chances of the presented car going into series production as such being practically zero. However, we could find some of its technologies in future models of Mercedes electric cars, raising their autonomy closer to the level at which most of us would be willing to forget the old solutions equipped with heat engines.