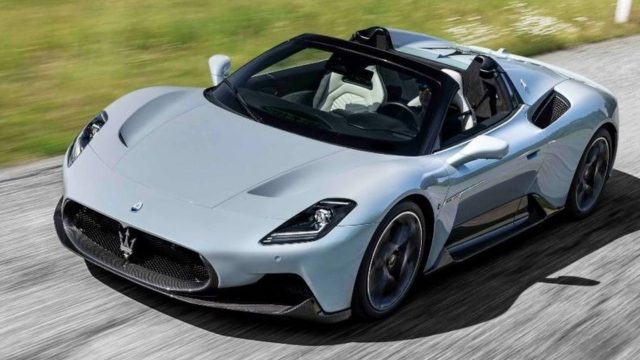 The Maserati MC20 Cielo, the roadster version of the MC20 coupe, seems to be helping Stellantis’ only luxury brand return to a healthy level of profitability.

The MC20 Cielo is the second new Maserati model unveiled this year, after the Grecale mid-size SUV.

“We’re in acceleration mode,” Maserati CEO Davide Grasso said at the unveiling of Cielo at the Modena brand’s factory.

Maserati will unveil a third new model this year, a redesigned mid-size GranTurismo coupe. Launched in 2023, GranTurismo will be the first Maserati to offer a fully electric version.

The fully electric MC20 will have an 800-volt system to reduce charging times and will have three electric motors – one in front and one on the rear wheels to provide optimal torque vectoring.

Maserati plans to build six to seven coupes and Cielos MC20 per day, with an annual capacity of 1,300 to 1,500 units. Since the launch of MC20 in July 2021, Maserati has produced 1,000, of which 700 have been delivered. The rest were sold, but not yet delivered, Maserati said.

Read:  PHOTO Best drone photography: what is the "Above us only sky" competition

Maserati Commercial Director Bernard Loire has said that the 2022 MC20 production is already sold out. The average waiting time is about eight months, and the company will protect the price of the car until delivery, even if commodity prices and inflation rise, he said.

The carmaker will also protect the price until delivery for Cielo, Loire said. The company expects the roadster to represent 40 to 50% of the total installed capacity. Maserati says convertibles make up 35% of the global supercar market.

Competitors to the MC20 include the Ferrari 296 GTS and the Lamborghini Huracan, both with convertible versions.

12 seconds to see the sky

The MC20 Cielo has a retractable glass roof provided by Webasto that takes 12 seconds to open or close, which Maserati says is the fastest in its class.

The “electrochrome” roof can change from transparent to opaque in less than a second at the touch of a button using Liquid Polymer Dispersed (PDLC) technology. This feature, which allows a complete view of the sky when the roof is closed – giving the model the name “Cielo” – was suggested by a customer, said Francesco Tonon, head of Maserati product planning.

“We’ve had discussion groups in Europe and the United States asking customers what they’re looking for in a roadster,” Tonon said, adding that they don’t want “a simple roofless coupe.” A British customer said he wanted a completely transparent roof so he could see the sky even when it was raining, a common situation in London, where he is based.

The roadster uses the same 3.0-liter Nettuno turbo V-6 engine that produces 621 hp and 730 newtons of torque thanks to the Maserati Twin Combustion system, which has dual ignition and double injection. The engine is mated to an eight-speed dual-clutch transmission that operates on the rear wheels.

The supercar is expected to go on sale in the first quarter of next year in Europe, followed by a launch in the US in the second quarter.

The MC20 Cielo will be Stellantis’ most expensive model. In Germany, the largest market in Europe will cost 260,000 euros.