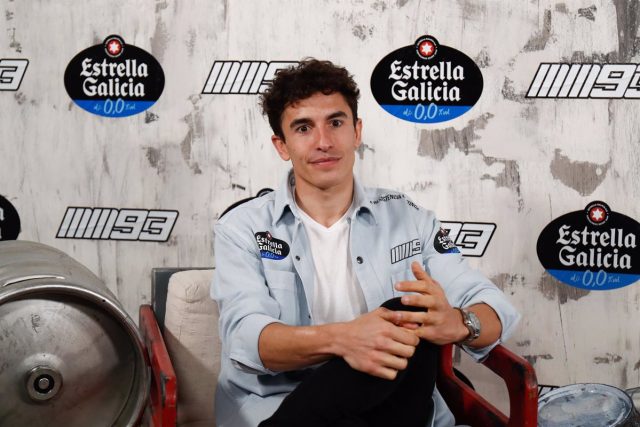 The Spanish MotoGP rider Marc Márquez (Repsol Honda) wants to shoot “more speed than experience as soon as possible”, because he recognizes that he does not have “the speed he had before”, so he has to “know how to suffer” and “adapt” , since to “be a champion” he knows that “the easy things” have to come out for him.

“It’s about adapting to what you need at all times. And right now I don’t have the speed I had before or things don’t come as easily as before, so you have to know how to suffer and adapt to the moment. If you want to fight for the World Cup you have to manage those moments in which you cannot and forget who is behind or in front of you and get the most out of it,” Márquez said in an interview with Europa Press after an act of Estrella Galicia 0,0.

This is how the Spaniard refers to his last race in Qatar, where he saw the fifth place finish as the best result and preferred not to risk it. “Four years ago I would have finished on the grandstand or the podium, settling for fifth is not easy but it has to be done sometimes. But if you always finish fifth you won’t be world champion,” he explained.

Read:  Crivillé: "Márquez has the challenge of adapting to the new Honda"

“In Qatar there were two good sensations. The first not to feel pain, which relieves you a lot and makes you have one less thing on your mind, not to talk about it so much because I’m the first one who doesn’t want so much talk. And then , I had soreness in my arm, which I hadn’t felt for two years. The doctor says that’s very good, because the arm works in a very natural position, it’s a feeling that I didn’t have in the tests,” he said about his recovery process. set-up after two “long” years of injuries.

The Catalan, with eight world titles, acknowledges that this period with physical problems was his “greatest challenge as an athlete”. “It’s one thing to win in MotoGP, to arrive and win and win and win… But it’s another thing to be out for two years, injured. I want to come back and win, if not, it doesn’t make sense and that’s one more pressure. I don’t know Yes, I will win in the same way, but my goal is to win, like the rest of the drivers,” he said.

Read:  Bastianini reigns at the end of Sepang and Aleix Espargaró and Jorge Martín complete the podium

In this new season, Márquez is one of the oldest, although I don’t think that maturity is key to being world champion. “When I came to MotoGP, everyone was more mature and I got the title. In the end, what makes you a champion is speed and making things easy for you. If you don’t have that, you have to use experience, perseverance or other things “, stressed the Catalan.

“For the time being, now it’s my turn to draw on experience and hopefully the sooner I can draw more speed than experience because winning races gives you an important cushion of points”, stressed the Repsol Honda rider, who next weekend will compete in the new Indonesian Grand Prix.