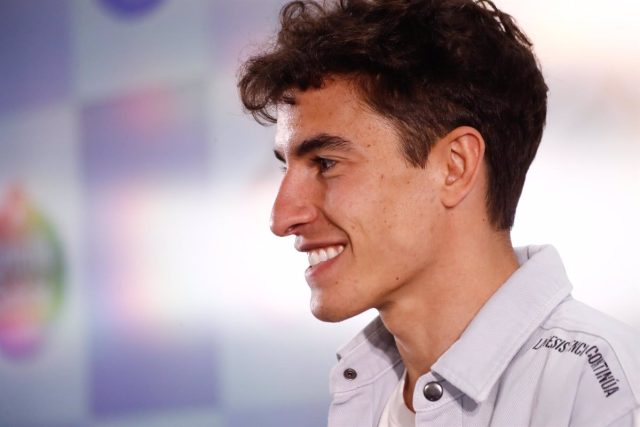 The Spanish MotoGP rider Marc Márquez (Repsol Honda) assured that he faces the Grand Prix of the Americas with the intention of “gaining confidence” and “not to win the race” after the injuries suffered recently after the falls in the Indonesian GP .

“After Mandalika I had a very hard week, with that risk to take and it is something that I discussed with the doctor and we thought it was better to stay at home relaxed and prepare well. This week I have had another medical check-up and my eyesight is fine. Obviously I’m not in my best shape but I’m going to try to get a great FP1 and thus start the weekend,” said Márquez at a press conference.

“I don’t remember too much about that crash (Indonesia), I remember it more because of the video images than what I experienced. I must say that the Indonesian GP was one of the worst in my career because I crashed several times, I had a new tire butt, I ended up crashing but now I’m getting that confidence back and I worked hard the week after the mishap even though it was really hard. Luckily I’m here.”

Asked if it is possible for him to win this Sunday, the man from Lleida said that “of course it is possible.” “But it’s not the way I’m going to approach the weekend. I’m coming from the Indonesian GP where I suffered a lot and crashed too much,” he said. “Now I’m back on track but the focus for this weekend is not to get the win but to gain confidence.”

“Compared to Qatar I feel a little better because in Qatar I also suffered a lot but in terms of confidence I feel worse, this is obvious after another injury and it affects my sight again. This is something that scares me and scary,” he added about his diplopia. “But aside from this, the championship is there and it’s important, but it’s not my main goal here today, Thursday, in the United States,” he said.

On the medical discharge, the Catalan explained that in a few hours he will have a “medical check-up”. “But if I’m here it’s because I have good eyesight because either you see or you don’t see, it can’t be any other way. I’ve tested the bike at the Alcarrás Circuit, in Lleida, and there haven’t been any problems, we’ll see how it goes the weekend,” he said.

Read:  Marc Márquez: "The information from the test has been good"

“We were doing very well but with the new casing everything changed and the focus for this weekend, as I said before, is to gain confidence, not the race. Now I have to get that confidence back. I’m not going to push more than necessary because I don’t want any more (…) It is true that it is the second time that I have problems with my vision in only six months and I have spoken with the doctors and I have asked what is the percentage of it happening again and what can happen if I stop for a year,” he said.

“In the end they explained to me that the impact of the fall was enormous and the risk is going to be the same this weekend and in a year. It is a nerve inside the eye and it moves due to the impact but if I am here it is to run, I shouldn’t think that I shouldn’t fall. I’m here to run and not to think about injuries,” he stated bluntly.