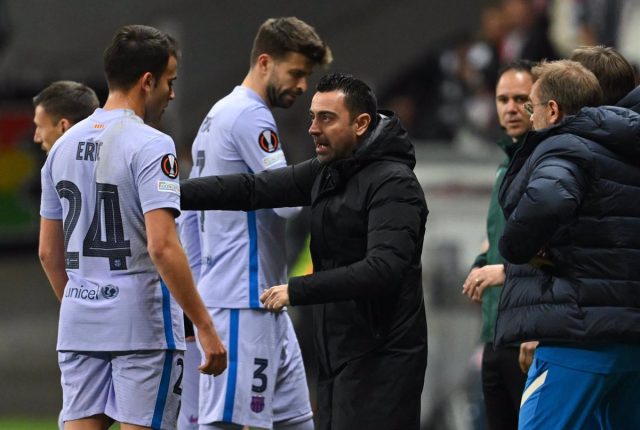 Barça’s coach, Xavi Hernández, considered himself “satisfied” with the 1-1 draw this Thursday against Eintracht, after suffering in Frankfurt against a “very physical” team that punished them by “going out like hell”, thinking that the Camp Nou will decide the ticket to the semifinals of the Europa League.

“Very difficult rival, very physical, coming out like hell on the counterattack, we haven’t known how to stop the transitions. They have complicated us a lot. We haven’t been good in the circulation of the ball, we have been thicker than usual, the field was not in perfect conditions and it has not made our game easier for us,” he said in statements to Movistar Plus, collected by Europa Press.

The culé coach recognized that German superiority and asked that the Camp Nou squeeze next week as the German fiefdom did. “They worked very hard on their system, they jumped to the pressure on the two interiors, we have generated fewer chances than usual. We are quite satisfied with the result because we are playing the second leg at home, with the field in our favour”, he stated.

“It has to be a pressure cooker like it was for us today. We leave satisfied with the result because it was a complicated field and a very difficult rival. The normal thing is that the team that proposes generates more, today it was the other way around. We haven’t known how to stop those cons, the game has been complicated for us, it hasn’t been easy. A difficult field, a difficult opponent, this is Europe, there are no surprises,” he added.

Xavi explained the arrivals that his team had and the goal, by Ferran in the 66th minute. “We have generated arrivals from the wing that we have not taken advantage of and the goal is a great goal. Pure talent of the players. This is Europe, everything is even” , he pointed out, before referring to Piqué’s change in the first few minutes. “He has been in pain for a long time, he has suffered a little, we will see that it is little,” he finished.