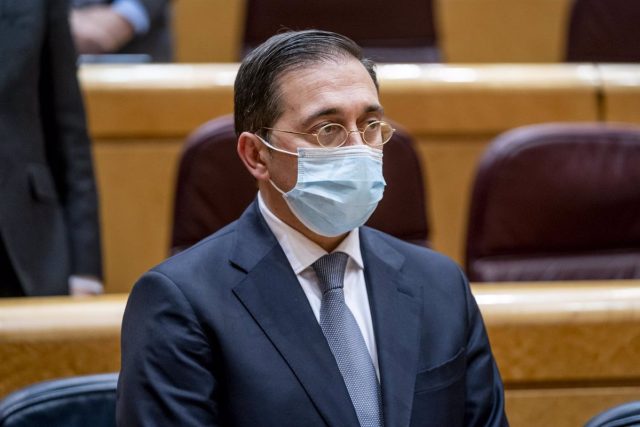 The Minister of Foreign Affairs, European Union and Cooperation, José Manuel Albares, in a control session with the Government in the Senate, on April 5, 2022, in Madrid (Spain) – A. Pérez Meca – Europa Press

The Spanish Foreign Minister, José Manuel Albares, has ruled out sending heavy material to Ukraine, alleging that there is currently no coordinated action in NATO, despite the fact that the organization has opened itself to each ally sending heavy and offensive material before the new phase in which the war in Eastern Europe is entering.

Although he has assured that Spain supports all measures to support kyiv within the EU and NATO, the minister has insisted that the option of sending tanks and planes is not on the table.

“We make decisions in concert and that is not on the table. Spain is already helping with military material, humanitarian aid, sanctions and political support,” assured the Foreign Minister when asked directly if Spain will send this type of military material.

These statements come on the margins of the meeting of allied ministers in Brussels, in which for the first time NATO has erased the differences between offensive and defensive military equipment, thus opening the door to sending battle tanks and other heavy equipment to kyiv.

At NATO headquarters, Albares met with the Ukrainian minister Dimitro Kuleba, to whom he guaranteed that Spain “does everything possible now” so that Ukraine “can survive”.

“Spain is in favor of all measures so that kyiv has control of the territory and its Army can defend the democratically elected government,” he pointed out.

After Kuleba declared that it is no longer possible to make distinctions between offensive and defensive weapons, “since they are all used against an aggressor and are defensive by definition”, Albares has supported this thesis, assuring that “all the military material in the hands of Vladimir Putin’s Army is offensive and all military equipment in the hands of the Ukrainian Army is defensive”.