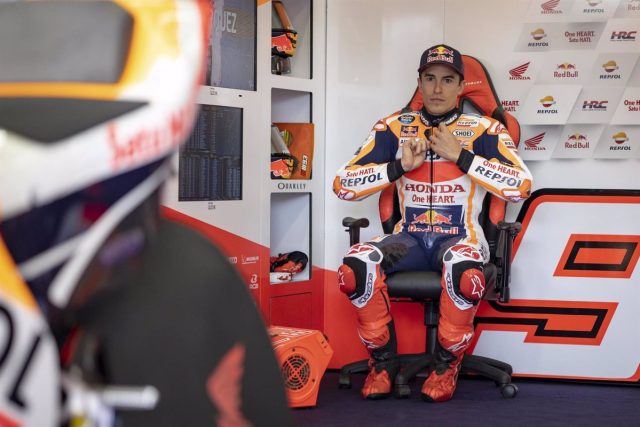 The Spanish MotoGP rider Marc Márquez (Repsol Honda) acknowledged that his withdrawal has not yet dissipated despite his recent injury problems and added that he dreams of fighting for more titles and doing it with the Repsol Honda Team, not with any other team or brand within of MotoGP.

In a new episode of ‘La Caja de DAZN’, the six-time MotoGP world champion reveals his intentions for the future to Izaskun Ruíz. “More than trying other brands or other teams, I have other motivations. Now, I have the motivation to fight for a title, but with this team, not with another,” he stressed.

He also assured that his will is to retire at Honda in the still distant future. “Eight happy years and two, not. It is the team of my life. I have always said, why not retire here? I continue with the idea,” he said about it.

However, right now he does not feel the pressure of the need to win. “I take the weekends as if it were fun, not as an obligation to go out and win.” If I finish fourth, fourth, if I finish fifth, fifth, if I finish sixth, sixth. Victory will come, hopefully,” he predicted.

After three visits to the operating room due to various complications from his humerus injury, suffered in early 2020, he admits that he now rides with a different style. “With experience, it’s not the style I like the most, but hey. Sometimes what you don’t like is what works,” she said.

Read:  Motorland will have a minimum of three MotoGP Aragon GPs until 2026

In addition, to these physical problems we must add his two episodes of diplopia –double vision–, which prevented him from running at full capacity in several races. “I have learned to juggle. What you had to learn as a child, I have learned now because of the sight. I continue to do these exercises as a precaution. Now, every month, I go for a review,” he assured.

The one from Cervera, despite everything, is still hungry for titles. “To race for pleasure, you take a motorcycle, you go quietly to a circuit on a Sunday without pressure and you ride laps. But on a circuit, you are going to compete. I am here to compete and celebrate things again. Will it be a title? No I know, but hopefully I can fight, that would be good,” he said.