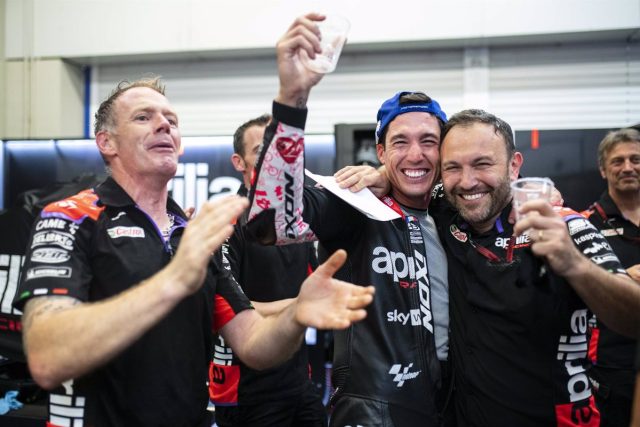 The Spanish rider Aleix Espargaró (Aprilia) has signed this Saturday the pole, with absolute track record, for the MotoGP race of the Grand Prix of Catalonia, the ninth round of the Motorcycle World Championship, and will start on a front row in which he They will be accompanied by the Italian Francesco ‘Pecco’ Bagnaia (Ducati) and the leader of the championship, the Frenchman Fabio Quartararo (Yamaha).

The man from Granollers, second overall, eight points behind ‘El Diablo’, completed a historic Saturday in the best possible way, where he beat the record for the Catalan track twice, to take his fourth pole position. “It has been very difficult, much more than it seems. It has been the most complicated lap of the year. The direction has been closed to me, I had to play with the limit,” he explained to DAZN after Q2.

Read:  Luis Cortes: "The situation is chaotic but we are fine"

At 31 thousandths Bagnaia finished, fourth in the World Cup and who dominated much of the session, while Quartararo will try to climb positions from third place to prevent the Catalan from cutting points in the general.

In a Q2 without incident and with the great absence of Marc Márquez (Repsol Honda), who underwent surgery for the fourth time on Friday, the Japanese Takaaki Nakagami (Honda) set the first great reference time that the World Championship leader beat in the absence of about ten minutes of session with a spectacular 1:39.055. Bagnaia and Aleix Espargaró, the fastest in this Saturday’s free practice, approached each other waiting to storm the ‘pole’ on the last lap.

‘Pecco’, with just over two minutes to go, set a 1:38.787 that earned him the lead in the time table, but his joy was short-lived, which took Aleix to complete his spin to stop the timed in 1:38.742, the absolute record for the premier class at the Circuit de Barcelona-Catalunya.

Joan Mir (Suzuki) and Raúl Fernández (KTM), who managed to get through Q1, will start seventeenth and twenty-fourth, and Àlex Márquez (Honda) will have to start last after not participating in the qualifying session due to his hard crash during the last free practice .