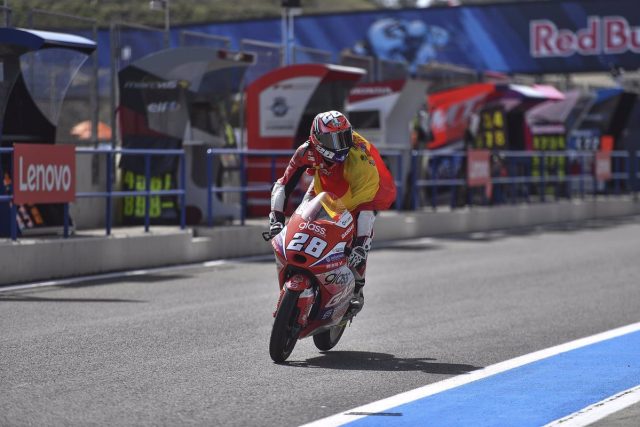 The Spanish rider Izan Guevara (GasGas) won victory this Sunday in the Moto3 race of the Catalunya Grand Prix, the ninth round of the Motorcycle World Championship, in which the young David Muñoz (KTM), starting twentieth, managed to get on the podium in his second race in the championship, while the Italian Celestino Vietti (Kalex) won Moto2 against the Spaniards Arón Canet (Kalex) and Augusto Fernández (Kalex).

The man from Palma thus signs his second victory of the year in a race with prominence for the Sevillian, who at only 16 years and three weeks and in his second race in the World Championship surprised everyone with a perfect performance from twentieth place to second place .

The Japanese Tatsuki Suzuki (Honda) completed the podium and got off it in the last lap to the leader of the World Championship, Sergio García Dols (GasGas), who had to settle for a fourth place that does not prevent him from continuing to lead the general with 150 points, 16 more than Guevara and 47 more than Jaume Masià (KTM), who was eighth.

Saturday’s ‘poleman’, the Italian Dennis Foggia (Honda), retained his privileged position in a start in which the Turkish Deniz Oncu (KTM) threatened to take it away from him. Meanwhile, the two Valresa GasGas Aspar Team, Izan Guevara and Sergio García Dols, who started third and seventh respectively, managed to get into the front group.

Both led the event in the first few laps, taking over from the lead together with the Japanese Tatsuki Suzuki (Honda), who remained the sole representative of Leopard Racing after Foggia left the track with 14 laps to go when braking for the Turn 10 due to problems with his motorcycle.

It all came crashing down one lap later, when Dani Holgado (KTM), David Salvador (Husqvarna) and Japan’s Ryusei Yamanaka (KTM) were involved in a multiple crash that reduced the front group to seven riders.

Then the dance began at the front, with Adrián Fernández (KTM), who started twenty-fourth and came to lead the race, as one of the applicants along with Guevara, García Dols, Oncu, Jaume Masià (KTM) and the surprising David Muñoz ( KTM) -which started twentieth-.

Among all, it was Guevara who managed to make room so that no one could overtake him, while on the last lap both Muñoz and Suzuki passed the World Championship leader. The man from Burriana returned the overtaking to the Japanese, but he overtook him again in the last corner to prevent him from getting on the podium by 51 thousandths.

In Moto2, the Italian Celestino Vietti (Kalex) was left alone at the top of the World Championship overall after overtaking the Spanish Arón Canet (Kalex) on the last lap, who stood on the podium alongside his compatriot Augusto Fernández ( kalex).

Thus, Cirié’s (133 points) breaks the tie with the Japanese Ai Ogura (Kalex), who is 16 points behind after being seventh this Sunday in Montmeló.

The American Joe Roberts (Kalex), who started third, took the lead to the detriment of the world leader and ‘poleman’ Celestino Vietti (Kalex), who was also overtaken by the Spanish Arón Canet (Kalex). The one from Corbera and the British Jake Dixon (Kalex) -who overtook him with 12 laps to go- began his pursuit of the American.

However, the script was completely changed with 13 laps to go when Roberts, who had a two-second lead, went down at Turn 5 ending all his options. A few laps later, Canet took the lead.

Dixon, Vietti and Augusto Fernández (Kalex) began the fight for the pending podium positions, in addition to the fact that the Valencian did not escape. In fact, the championship leader passed him with two laps to go, although Canet soon returned the pass.

But on the last lap, the transalpine shot hard to sign his definitive overtaking and take the victory by 81 thousandths over Canet. Augusto Fernández, for his part, managed to overtake Dixon to close the podium.

Among the rest of the Spaniards, Pedro Acosta (Kalex), winner at Mugello, finished sixth, and Alonso López (Boscoscuro) and Manu González (Kalex) also entered the ‘Top 10’ by being eighth and ninth respectively.

Jorge Navarro (Kalex) was fourteenth, Fermín Aldeguer (Boscoscuro) fifteenth and Jeremy Alcoba (Kalex) eighteenth. Albert Arenas (Kalex) had to withdraw due to motorcycle problems in a race that Alex Toledo (Kalex) and Marcos Ramírez (MV Augusta) did not finish either.