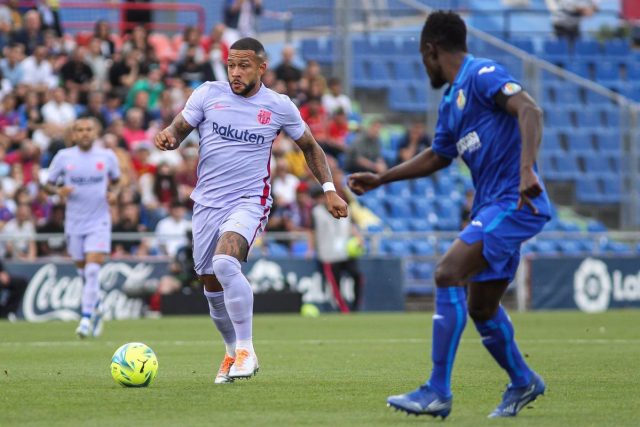 Memphis Depay requested the change with a possible injury

Getafe and Barça shared a ‘biscuit’ at the Coliseum Alfonso Pérez with a draw (0-0) to meet the objectives of both teams, and that knew salvation and permanence for the ‘azulón’ side already runner-up and presence in the next Spanish Super Cup for the Blaugranas, in an insipid game with hardly any chances.

A draw was worth both of them and, whether or not there was a prior agreement between the two teams (that famous ‘biscotto’ of Italian origin already internationalized like pizza), the truth is that it seemed so. Just four shots on goal between Getafe (3) and Barça (1), none of them dangerous for the absent Soria and Ter Stegen.

The game ended with a giant round in the center of the field and, to add more uncertainty to what was seen, the Getafe players moved the ball. Barça tried to press, but without desire. Like those that did not put neither one nor the other to go in search of the goal. This yes, in the global the Barça had the 72 percent of the possession.

Read:  Migno and Vietti start the World Cup with victories against García Dols and Canet

As much as there were casualties on both sides, as much as the passing of the minutes was indicating that conceding a goal made it difficult to achieve the goal on Sunday, what was seen at the Coliseum was not football. Not as expected, at least.

There were no clear scoring chances. Barely some distant centered shot, or too crossed. A bit of ‘salt’ in a loss by Ter Stegen that ended with Enes Ünal asking for a penalty, which was not. And those rounds on both sides, as if the snack-dinner also included snacking and distributing the ball.

The worst news for Barça was the possible injury of Memphis Depay, who requested the change after noticing muscle discomfort. Luuk de Jong took his place, but he did not receive a center with which to try to take his golden head for a walk, which has given his team so many goals and points this season.

Without a doubt, the joy was local. ‘Getafe es de Primera’ was sung at the Coliseum. And it is that the ‘azulón’ team of Quique Sánchez Flores will experience its sixth consecutive campaign in the elite after its express relegation and promotion in 2016 and 2017.

And Barça, with an unknown ‘eleven’ due to the losses of Piqué, Araujo, Dest, Nico, Pedro, Jordi Alba, Eric Garcia or Frenkie de Jong, did not compete or shine but left Getafe with their championship secured and this entails , in addition, the prize of aspiring to one more title; They will play the Spanish Super Cup.